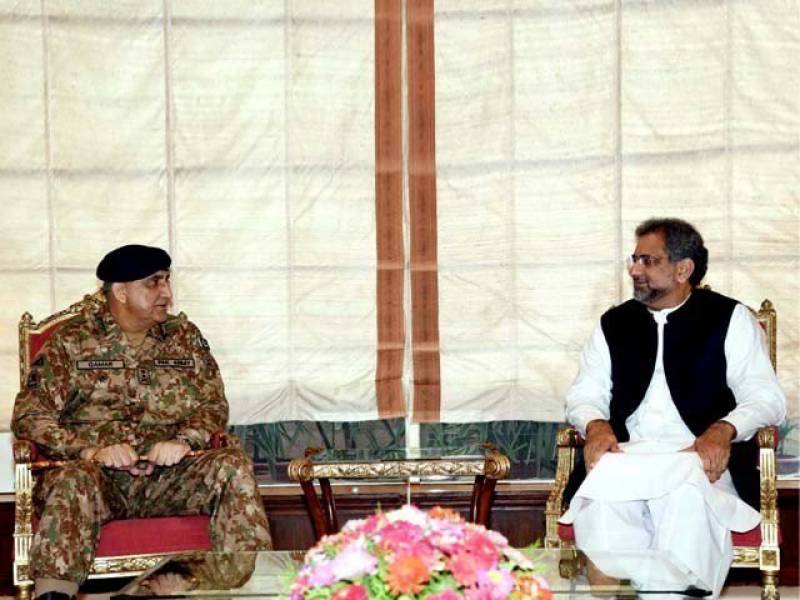 Islamabad (Staff Report/ Agencies): Prime Minister Shahid Khaqan Abbasi and Chief of Army Staff General Qamar Javed Bajwa on Sunday decided that force will not be used to disperse protesters who had camped out at Islamabad's Faizabad Interchange Since Nov 8.

During a meeting, the duo exchanged views on the law and order situation matter and tried to formulate a plan of action. Both agreed that the issue should be resolved in a peaceful manner.

They also discussed the issue of whether firearms should be used by army personnel. In its order, the Islamabad High Court (IHC) “restrains [the] use of ‘firearms’ during clearance operation”, as per Item 8 of its “judgment of writ petition number 3914 of 2017”.

The army chief affirmed that the army will act according to the law and Constitution of the country.

He also expressed concern over restrictions placed on TV news channels and suggested that the prohibition be removed.

General Bajwa also suggested that the findings of the Raja Zafar-ul-Haq committee should be made public.

The law enforcement agencies acted under court orders on Saturday to disperse protesters who had camped out at Islamabad's Faizabad Interchange Since Nov 8.

Meanwhile, The Pakistan Rangers Punjab took control of the sit-in area at Faizabad Interchange in Islamabad on Sunday morning.

Police and the Frontier Corps (FC) have been deployed at I-8 Markaz.

Rangers have also cordoned off the IJP Road, Expressway, Murree Road and the Faisal Avenue.