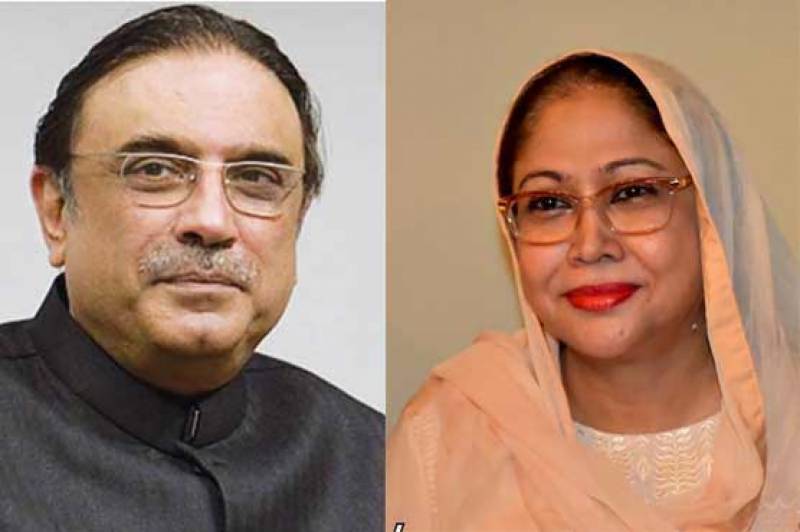 The hearing of the case was headed by Accountability Court Judge Azam Khan.

Asif Ali Zardari could not be produced before the court whereas Talpur was brought from the Adiala Jail.

The NAB prosecutor appraised the court that supplementary references had also been filed in the fake account case, which has 65 volumes and is currently under scrutiny.

However, the number of accused remains the same in the reference. The NAB prosecutor has said that more evidence is being collected.

On Monday, the NAB filed a supplementary reference against former president Zardari and his sister Faryal Talpur.

NAB, in its reference, alleged that the funds of a private bank were wrongly used and land was purchased under the name of a benamidar (ostensible owner).

The anti-corruption watchdog said that the accused named Mushtaq has a joint account with the former president.

The NAB references said that according to the bank record, the account was used for the PPP co-chairman. Funds were also transferred abroad through the same account, the reference alleged.

As per the reference, Rs8.3 billion were withdrawn from the fake accounts and Rs1.2bn were taken out illegally from a private bank’s account. It also says that Rs950 million were then transferred back to Zardari's account for his use.

The reference further alleged that Anwar Majeed, Abdul Ghani and Mustafa Zulqarnain played a crucial role in the case.

NAB had arrested Zardari on June 10 and he is currently undergoing medical treatment at the Pakistan Institute of Medical Sciences (PIMS) of Islamabad which has been declared as a sub-jail.

The former president and his sister, in connivance with others, are accused of misappropriated the funds of Summit Bank by releasing unauthorised payments to M/s Regent Services and various fake/benami vendors including A-One International for purchase of G-2 Land and its construction.