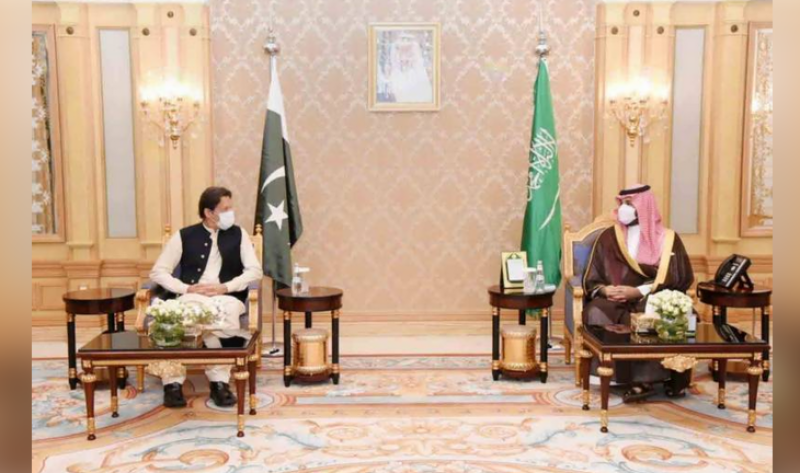 According to details, the premier paid tribute to the leadership of the Custodian of the Two Holy Mosques, King Salman bin Abdulaziz, in the progress and development of the Kingdom.

PM Imran lauded Crown Prince Mohammed bin Salman for the Saudi Vision 2030, which aimed at transforming the socio-economic development of the Kingdom in the 21st century.

"The Summit clearly demonstrated the commitment of the Saudi leadership to take tangible steps for effectively tackling the challenge of Climate Change", Khan added.

He reiterated Pakistan’s support in the implementation of these Green Initiatives.

PM Imran reaffirmed Pakistan’s deep fraternal relations with Saudi Arabia and highlighted the significance Pakistan attached to its strategic ties with the Kingdom.

He also expressed gratitude to Saudi Arabia for its steadfast support to Pakistan at every crucial juncture.

The two leaders agreed to further strengthen bilateral cooperation across all fields.

On the latest developments in Afghanistan, PM Imran stressed the importance of active and constructive engagement of the international community to help alleviate the sufferings of the Afghan people.

The two leaders agreed to closely coordinate efforts to address these challenges.

Pakistan and Saudi Arabia are bound in a fraternal relationship marked by mutual trust and understanding, close cooperation, and an abiding tradition of supporting each other.

This is the second visit of Prime Minister Imran Khan to Saudi Arabia this year. He earlier visited the Kingdom in May 2021.