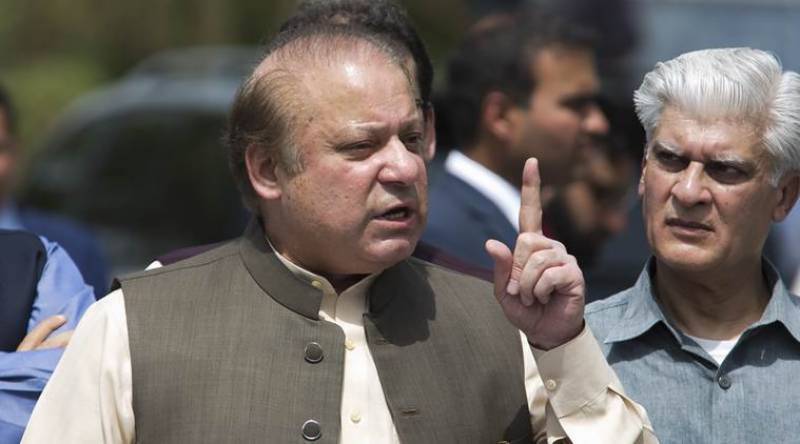 Islamabad (Staff Report): The Accountability court permitted former Prime Minister Nawaz Sharif to go back on Tuesday, after marking attendance in the hearing of the three references filed by the National Accountability Bureau (NAB) against him.

The court had also summoned his children, Maryam, Hussain and Hassan Nawaz, and son-in-law Captain (reted) Safdar, but all they did not appear before the court as they are in London.

According to details, during his appearance, Nawaz Sharif stated before the court that his wife was not well therefore his children and son-in-law could not come as they are in London to look after Ms. Nazwaz.

He appeared for less than five minutes and the court permitted him to go back. The court said that former premier has been asked to leave so that hearing could begin.

A number of Pakistan Muslim League-Nawaz (PML-N) workers, lawyers and government officials were at the courts compound to greet the former premier.

Khawaja Harris is representing the former premier in court while Amjad Pervez will be counsel for  his children and son-in-law.

For the security purposes, a heavy contingent comprising over 1,500 troops of police, Rangers and special branch, has been deployed around the judicial complex.

Earlier, amid tight security, Nawaz Sharif left for the court from the Punjab House in Islamabad in form of a motorcade, consisting of over 30 vehicles.

The former PM he was scheduled to hold media talk soon after the hearing, but after a little change he will address an important press conference at 3pm at the Punjab House.

On Monday, he returned to Pakistan after weeks long stay in London with his ailing wife, Begum Kulsoom Nawaz, who is suffering from cancer disease.