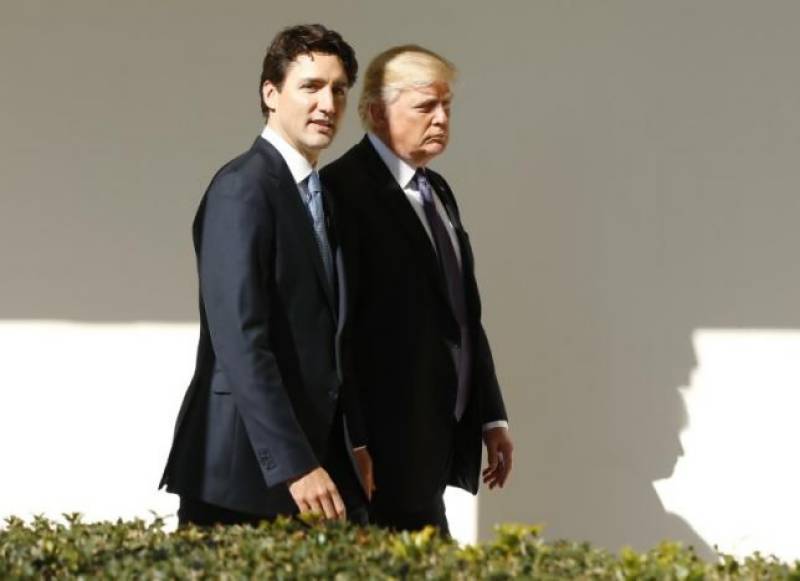 Washington, U.S., (Reuters): American President Donald Trump told the leaders of Canada and Mexico on Wednesday that he will not terminate the NAFTA treaty at this stage, but will move quickly to begin renegotiating it with them, a White House statement said.

The announcement came after White House officials revealed that Trump and his advisers had been considering issuing an executive order to withdraw the United States from the trade pact with Canada and Mexico, one of the world's biggest trading blocs.

The White House said Trump spoke by telephone with Mexican President Enrique Pena Nieto and Canadian Prime Minister Justin Trudeau and that he would hold back from a speedy termination of NAFTA, in what was described as a "pleasant and productive" conversation.

A White House statement said, "President Trump agreed not to terminate NAFTA at this time and the leaders agreed to proceed swiftly, according to their required internal procedures, to enable the renegotiation of the NAFTA deal to the benefit of all three countries."

Trump was quoted as saying in the statement, "It is my privilege to bring NAFTA up to date through renegotiation. It is an honor to deal with both President Peña Nieto and Prime Minister Trudeau, and I believe that the end result will make all three countries stronger and better."

The Mexican and Canadian currencies rebounded in Asian trading after Trump said the U.S. would stay in NAFTA for now. The U.S. dollar dropped 0.6 percent on its Canadian counterpart and 1 percent on the peso.

The White House had been considering an executive order exiting NAFTA as early as Trump's 100th day in office on Saturday, but there was a split among his top advisers over whether to take the step.

During his election campaign Trump threatened to renegotiate NAFTA and in the past week complained bitterly about Canadian trade practices.

It was under an executive order signed by Trump on Jan. 23 that the United States pulled out of the sweeping Trans-Pacific Partnership trade deal.

News of the potential presidential action to withdraw from NAFTA earlier drove the Mexican and Canadian currencies lower.

"To totally abandon that agreement means that those gains are lost," said Paul Ferley, an economist at Royal Bank of Canada.

Trump has repeatedly vowed to pull out from the 23-year-old trade pact if he is unable to renegotiate it with better terms for America. He has long accused Mexico of destroying U.S. jobs. The United States went from running a small trade surplus with Mexico in the early 1990s to a $63 billion deficit in 2016.

Details about the draft executive order on NAFTA were not immediately available.

Trump has faced some setbacks since he took office in January, including a move by courts to block parts of his orders to limit immigration.

Withdrawing from NAFTA would enable him to say he delivered on one of his key campaign promises, but it could also hurt him in states that voted for him in the election.

"Mr. President, America's corn farmers helped elect you,” the National Corn Growers Association said in a statement. "Withdrawing from NAFTA would be disastrous for American agriculture."

The first administration source told Reuters that there were diverging opinions within the U.S. government about how to proceed and it was possible that Trump could sign the executive order before the 100-day mark of his presidency.

The source noted that the administration wanted to tread carefully. “There is talk about what steps we can take to start the process of renegotiating or withdrawing from NAFTA,” this source said.

Mexico had expected to start NAFTA renegotiations in August but the possible executive order could add urgency to the timeline.

The Mexican government had no comment on the draft order. The country's foreign minister said on Tuesday that Mexico would walk away from the negotiating table rather than accept a bad deal.

Trump recently ramped up his criticism of Canada and this week ordered 20 percent tariffs on imports of Canadian softwood lumber, setting a tense tone as the three countries prepared to renegotiate the pact.

Canada said it was ready to come to talks on renewing NAFTA at any time.

"At this moment NAFTA negotiations have not started. Canada is ready to come to the table at any time," said Alex Lawrence, a spokesman for Canadian Foreign Minister Chrystia Freeland.