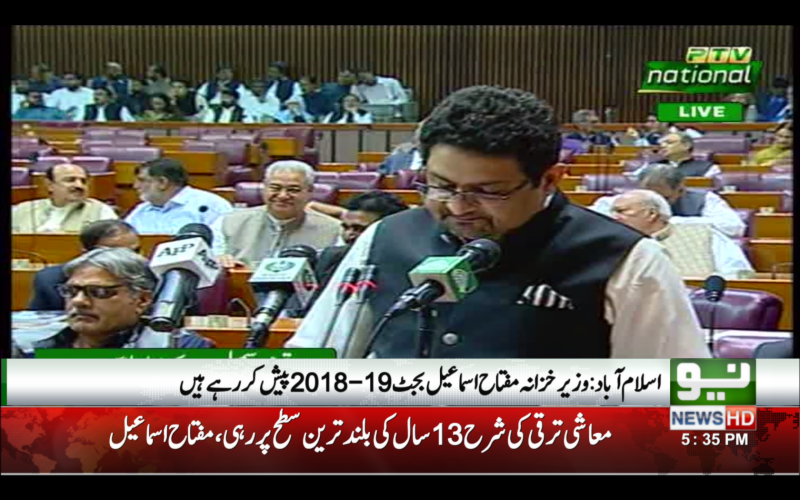 Islamabad (Staff Report): Pakistan Muslim League-Nawaz (PML-N) government is presenting the sixth budget in the National Assembly on Friday (today) with a total outlay of Rs 5.932 trillion for fiscal year 2018-19.

Dr Miftah Ismail, who took oath as federal minister for finance as his appointment was recommended by Prime Minister Shahid Khaqan Abbasi and approved by President Mamnoon Hussain, is presenting the budget in the lower house of the Parliament before getting it approved from the federal cabinet.

The PML-N-led government has become the first government in the country’s history that presented the sixth budget in its five-year constitutional tenure.

The opposition parties had asked the government to present a four-month budget, allowing the next government to give the remaining financial plan.

As the session started, the opposition parties objected to the ‘un-elected’ Miftah Ismail presenting the budget speech.

Miftah, who was earlier the Board of Investment chairman before being appointed adviser to the prime minister on finance in December 2017, was sworn in as the country’s finance minister earlier today.

Opposition Leader in the National Assembly Syed Khursheed Shah staged a protest against the outgoing PML-N presenting a full-term budget instead for the remaining three months of its tenure.

He said that the Prime Minister could have presented this budget or asked State Minister for Finance Rana Muhammad Afzal, who is an elected person of this house to present the budget.

He said that the government is going to complete its tenure and presenting federal budget for the whole year should be left for the next government.

The opposition also walked out of the House.

According to Radio Pakistan, the federal gross revenue receipts are estimated at 5661 billion rupees as compared to 4992 billion rupees in the outgoing year.

Out of the total revenues, the provincial governments' share is estimated to 2590 billion rupees as compared to 2316 billion rupees revised estimates for the current financial year.

The interest payments for next year have been budgeted at 1620 billion rupees against the revised target of 1526 billion rupees for the outgoing year.

Budget deficit will be four point nine percent of the GDP as opposed to five point five percent of GDP of revised budget estimates in the outgoing year.

The Finance Minister announced ten percent adhoc relief allowance to the civil and armed forces employees and ten percent increase in pensions across the board.

House rent ceiling and house rent allowance have also been increased by fifty percent each.

Minimuum pension is being increased from the existing six thousand to ten thousand rupees considering the difficulties of low paid pensioners.

Similarly, family pension would also get increase from 4500 rupees to 7500 rupees.

Minimum pension of pensioners above seventy five years of age would be fifteen thousand rupees.

The government has also proposed an allocation of twelve billion rupees for provision of advances to government servants for house building and purchase of transport facility.

It has also set aside five billion rupees for senior officers' performance allowance, details of which would be announced separately.

The finance minister said the financial impact of these proposals will be sixty nine billion rupees.

Miftah Ismail said despite many difficulties and challenges, the government achieved economic stability over the last five years and took the growth rate to the record level.

Highlighting the economic performance of incumbent government, the Finance Minister said GDP ratio remained five point eight percent during the current fiscal year which is the highest in the last thirteen years.

He said volume of economy over the last five years has increased to thirty four thousand, three hundred and ninety six billion rupees.

Finance Minister said per capita income has increased to over one hundred and eighty thousand rupees. Today, the country has become the twenty fourth biggest economy.

Finance Minister said budgetary allocations for Benazir Income Support Program for the next financial year have been increased to 124.7 billion rupees as against 121 billion rupees in the outgoing year.

He said the scheme launched by PML (N) government in 1991 to pay the loans of widow borrowers from house building finance corporation up to the value of 3.5 lac rupees would continue next year with an increased limit of six hundred thousand rupees.

These include withdrawal of three percent custom duty on import of bulls meant for breeding purposes.

This will substantially reduce their cost of inputs and boost further expansion in respect of poultry sector.

The government announced that the rate of customs duty of eleven percent on corrective eyesight glasses would be reduced to three percent.

The Finance Minister announced that enabling provisions are proposed to be incorporated in the income tax ordinance to implement property transactions.

Under the proposals, property transactions will be recorded on the value declared by the buyer and the seller and FBR notified rates are proposed to be abolished.

At the federal level, one percent adjustable advance tax from the purchaser on the declared value is proposed to replace the existing withholding tax on sellers and purchasers.

It is proposed that the non-filers may not be permitted to purchase property having declared value exceeding four million rupees.

The provinces have been asked to abolish the provincial rates for the collection of stamp duty and to collect a total of one percent tax under stamp duty and capital value tax on the value declared by the buyer and the seller.

To discourage under declaration, the FBR may hold a right to purchase any property within six months of registration by paying a certain amount over and above the declared value which may be hundred percent in the next fiscal year, seventy five percent in the following year and fifty percent in the subsequent year.

The Finance Minister said due to enhancement of taxable limit of income to one point two billion rupees, the number of filers will be substantially reduced leading to loss of revenue.

Miftah Ismail said the super tax imposed in 2015 for rehabilitation of internally displaced persons would continue but its rate may be reduced by one percent per year from the next financial year for both banking and non-banking companies.

The corporate tax rate would be twenty nine percent in tax year 2019 and will be reduced by one percent each year up to tax year 2023.

Presently, zero point six percent tax is charged on non-cash banking transactions from non-filers which is being reduced to zero point four percent on a permanent basis.

The Finance Minister said in order to increase the cost of doing business higher for non-filers higher rates of tax withholding for non-compliant tax payers have been proposed.

Miftah Ismail said withholding tax rates on sales of goods for non-filers would be increased from existing seven per cent to eight percent in case of a company and seven point seven five per cent to nine per cent in non-corporate cases.

He announced exemption from sales tax and customs duty on paper for printing of holy Quran.

With a view to promoting agricultural growth, reduction in rate of sales tax to three per cent across the board on all fertilizers has been proposed.

It has also been proposed that the rate of sales tax of ten percent on supply of natural gas to fertilizers for use as feed stock may be reduced to five percent.

The budget proposes exemption from sales tax to twenty one types of computer parts in order to promote local assembling and manufacturing of laptops and computers.

Rate of further tax has been increased from the existing two to three percent to discourage undocumented economy and increase in revenue.

Federal excise duty on locally produced cigarettes is proposed to be enhanced.

The Finance Minister said that sixteen percent customs duty on charging stations for electric vehicles will be withdrawn while customs duty on import of electric cars is proposed to be reduced from fifty percent to twenty five percent in addition to exemption from regulatory duty of fifteen percent.

He said import of CKD kits for assembly of domestically produced electric cars is proposed at ten percent.

Similarly, five percent customs duty on specified LED parts and components is proposed to be withdrawn.

For promotion of tourism, Miftah Ismail said customs duty on import of prefabricated structures, complete rooms for setting up of new hotels and motels in hill stations of coastal areas of Balochistan and AJK and Gilgit Baltistan will be reduced from twenty percent to eleven percent.

Regulatory duty on import of optical fibre cable is to be reduced from twenty percent to ten percent. In addition, duty on fiber optic cable and other raw material would be reduced to five percent.