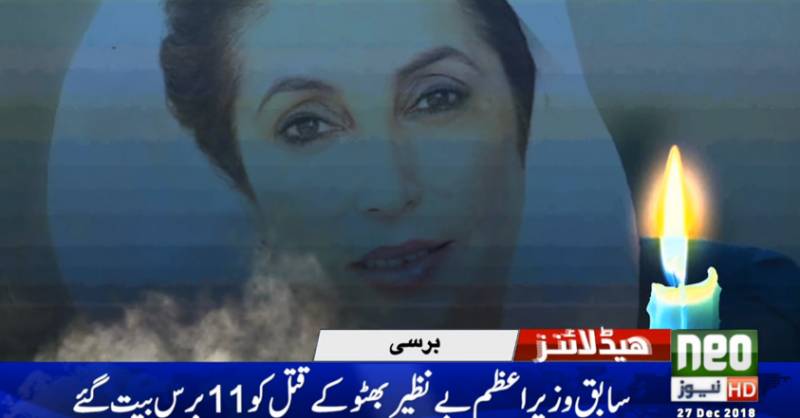 Larkana (Staff Report/Agencies): The 11th death anniversary of former prime minister Benazir Bhutto was observed on Thursday with due solemnity.

The main congregation to observe the death anniversary of the martyred leader was held at her hometown Garhi Khuda Bakhsh in Larkana district of Sindh.

A large number of PPP leaders and workers from across the country reached Garhi Khuda Bakhsh Bhutto where they offered fateha and paid tribute to Zulfikar Ali Bhutto and Shaheed Benazir Bhutto for their services for the cause of democracy and country.

Quran khawani and fateha khawani were also held at all the district offices of Pakistan Peoples Party.

On the occasion, strict security arrangements were made to maintain law and order.

The provincial government of Sindh announced a public holiday on account of the death anniversary of former premier.

Addressing the public gathering, former president and co-chairman of the PPP Asif Ali Zardari warned his rivals of a fierce fight back "in court and everywhere else".

He said that the PPP and its leaders were not scared of the tactics being applied by ‘ladla’ and his thugs.

criticising the policies of the incumbent government, Zardari said PTI failed in running the country, adding that the performance of the government was not up to the mark despite getting assistance from the friendly countries.

Addressing the rally, PPP chairman Bilawal Bhutto Zardari said his party will resist against the ‘ruthless forces’ and their conspiracies.

He said that if the institutions are probing the benami accounts then they should also investigate ‘the benami prime minister’. “The JIT report is a lie, but I’m sure the court will throw it out,” Bilawal said.

The PPP leader questioned why the opposition is the "sole target" of the ongoing accountability drive in the country.

"Why are federal ministers and the prime minister and his family above the law?" he asked.

The PPP chairman alleged that the new prime minister has been brought in to reintroduce the one-unit system in the country.

Bilawal said that the new government wants to remove the 18th amendment from the constitution.

Remembering his mother, Bilawal said that the great leader was taken away from him and the party on this fateful day. He said that Jiyalas (PPP workers) were the biggest asset of his life.

Former prime minister Benazir Bhutto was assassinated in a gun and bomb attack in Rawalpindi on December 27, 2007 when she was leaving a PPP rally at the Liaquat Bagh in Rawalpindi.