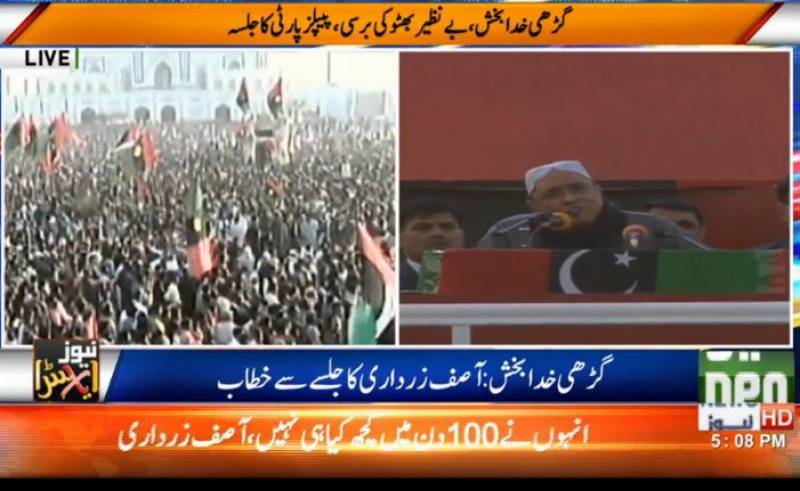 Larkana (Staff Report): Former president and Pakistan Peoples Party (PPP) co-chairman Asif Ali Zardari on Thursday said that he is ready to face his political opponents "in court and everywhere else".

Addressing the public gathering on the occasion of the 11th death anniversary of assassinated former prime minister Benazir Bhutto in Garhi Khuda Bukhsh, Asif Zardari said that the PPP and its leaders are not scared of the tactics being applied by ‘ladla’ and his thugs.

He said that Bilawal was his and Benazir Bhutto's son and no one can scare him.

Criticising the policies of the government, Zardari said that the PTI failed in running the country, adding that the performance of the government was not up to the mark despite getting assistance from the friendly countries.

He said that the PTI-led government thoroughly lacks competence.

“Those who know how to work know that 100 days are more than enough,” the former president said, adding that the PTI government got ample time to deliver through governance but it failed.

Addressing the gathering, PPP chairman Bilawal Bhutto vowed to fight back ‘ruthless forces’ and their conspiracies.

Bilawal said that if the institutions are probing the benami accounts then they should also investigate ‘the benami prime minister’. “The JIT report is a lie, but I’m sure the court will throw it out,” Bilawal said.

The PPP leader questioned why the opposition is the "sole target" of the ongoing accountability drive in the country.

"Why are federal ministers and the prime minister and his family above the law?" he asked.

The PPP chairman alleged that the new prime minister has been brought in to reintroduce the one-unit system in the country.

Bilawal said that the new government wants to remove the 18th amendment from the constitution.

Remembering his mother, Bilawal said that the great leader was taken away from him and the party on this fateful day. He said that Jiyalas (PPP workers) were the biggest asset of his life.

Former prime minister Benazir Bhutto was remembered across the country on her 11th death anniversary on Thursday.

She was assassinated in a gun and bomb attack in Rawalpindi on December 27, 2007.

The PPP organised a central congregation to observe BB’s death anniversary in her hometown Garhi Khuda Bakhsh in Larkana district of Sindh.

Earlier on Thursday, addressing a press briefing in Islamabad Federal Information Minister Fawad Chaudhry announced that the government has decided to place as many as 172 people, including Asif Ali Zardari on the Exit Control List (ECL) in the light of the ongoing money laundering probe.

He said that the federal cabinet has taken the important decision after taking in view the report of the Joint Investigation Team (JIT) submitted in the Supreme Court of Pakistan.

"I hope Zardari will take JIT seriously. This is not the old Pakistan where people will be compromised," he said.  "The independent accountability process will continue.” Fawad added.

Criticising the past governments, Fawad said that the public offices were used for money laundering.