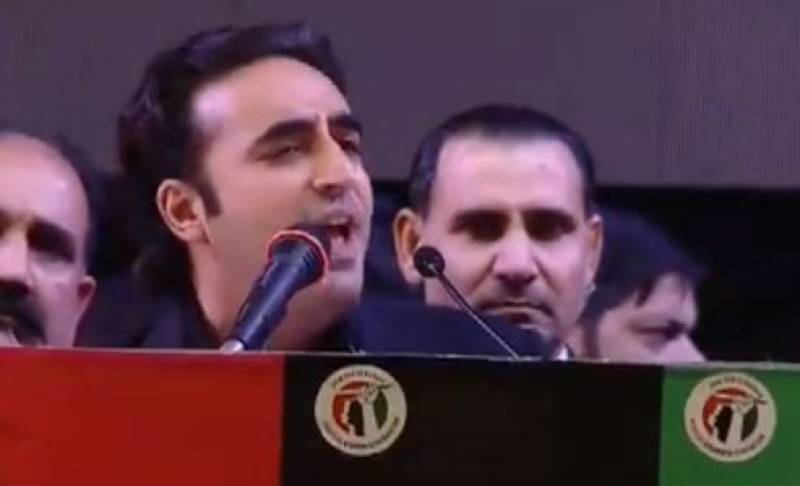 Rawalpindi (Web Desk): Pakistan People's Party (PPP) Chairman Bilawal Bhutto-Zardari on Friday vowed to complete the unfinished mission of Benazir Bhutto to restore people's rule in the country once again and continue the struggle with the support of masses and the party supporters.

Addressing a public gathering held to observe former prime minister Benazir Bhutto's 12th death anniversary at Liaquat Bagh — the venue of her assassination — in Rawalpindi, Bilawal said the country was in danger and it was the duty of his party "to complete the mission of Benazir Bhutto".

"Benazir was a chain that united the federation of Pakistan, but this was not acceptable to her enemies," he added.

Lashing out at the government, the PPP chairman said that the "puppet regime of political orphans" was crumbling.

"These are the same political orphans Benazir warned you about," he said. "Look at how they conduct their politics. They are cowards."

Bilawal taunted the government, saying all claims they made about politicians had proven false.

The country’s economic decisions, Bilawal claimed, are being taken by International Monetary Fund (IMF) instead of its people.

Bilawal said that 2020 will be the year of elections.

The PPP chairperson praised his grandfather, Zulfikar Ali Bhutto, by crediting him with giving rights to the labourers when he was prime minister.

Bilawal said his mother had fought two dictators during her lifetime and never backed down from anyone.

Bilawal said the credit went to Benazir for providing Pakistan with the much-needed missile technology. He said the slain PPP leader had come back to Pakistan, before her assassination, to ensure democracy thrived in the country.

The PPP chairperson slammed the government, saying it was an enemy to the poor people of Pakistan. He criticised "those in corridors of power" for removing women beneficiaries of the Benazir Income Support Programme (BISP) from its list and declaring them "undeserving".

Before Bilawal came to address the crowd, PPP co-chairman and former president, Asif Ali Zardari, also addressed the gathering via a video message that was broadcast on a giant screen at the venue.

Speaking from a hospital bed, Zardari criticised the government for leading the country into its current political and economic situation.

He said the present ruling regime "has nothing to do with the problems being faced by the country's poor".

The former president expressed hope that PPP Chairman Bilawal Bhutto will be able to solve these problems very soon and "will lead the nation".

A large number of PPP leaders and party workers attended the event.

The venue and roads leading to Liaquat Bagh were decorated with PPP flags and pictures of Zulfikar Ali Bhutto, Benazir and Bilawal.