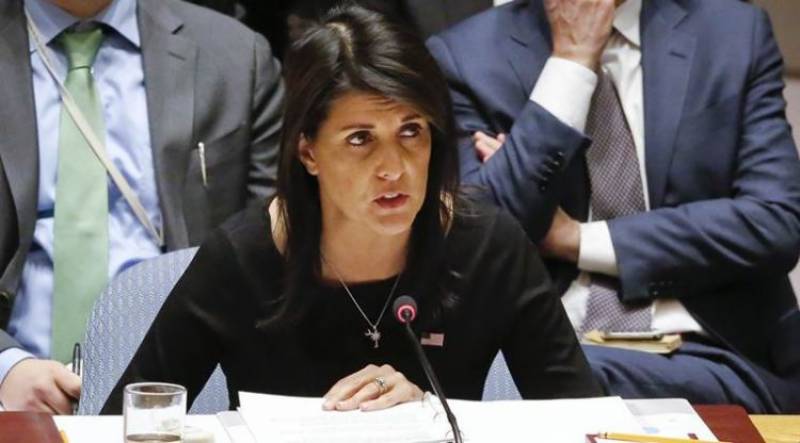 United Nations (Reuters): The United States threatened unilateral action against Iran on Monday after Russia vetoed a western bid for the United Nations Security Council to call out Tehran for failing to prevent its weapons from falling into the hands of Yemen’s Houthi group.

“If Russia is going to continue to cover for Iran then the US and our partners need to take action on our own. If we’re not going to get action on the council then we have to take our own actions,” US Ambassador to the UN Nikki Haley told reporters during a visit to Honduran capital Tegucigalpa.

Haley did not specify what kind of action could be taken.

The Russian veto was a defeat for the United States, which has been lobbying for months for Iran to be held accountable at the United Nations, while at the same time threatening to quit a 2015 deal among world powers to curb Iran’s nuclear program if “disastrous flaws” are not fixed.

“Obviously this vote isn’t going to make the decision on the nuclear deal. What I can say is it doesn’t help,” Haley said. “That just validated a lot of what we already thought which is Iran gets a pass for its dangerous and illegal behavior.”

President Donald Trump warned European allies last month that they had to commit by mid-May to work with Washington to improve the pact. Britain drafted the failed UN resolution in consultation with the United States and France.

The initial draft text - to renew the annual mandate of a targeted sanctions regime related to Yemen - wanted to include a condemnation of Iran for violating an arms embargo on Houthi leaders and include a council commitment to take action over it.

In a bid to win Moscow’s support, the draft that was vetoed had been weakened to simply “note with particular concern” the violation, which was reported to the council by UN experts monitoring sanctions. It received 11 votes in favor, two against - Russia and Bolivia - while China and Kazakhstan abstained.

Russia has questioned the findings of the UN experts report, which was submitted to the council in January.

A council resolution needs nine votes in favor and no vetoes by Russia, China, the United States, France or Britain to pass. Following the failed vote on the British draft, the council adopted a rival Russian draft that did not mention Iran and simply renewed the UN sanctions regime on Yemen for a year.

A senior Western diplomat, speaking on condition of anonymity, acknowledged that the international community - and in particular, the Europeans - needed to do more to voice their concerns about Iran’s behavior.

“We don’t have any illusions with regard to Iran’s policy towards Israel, Iran’s role in the region ... and also what they do in terms of constructing ballistic missiles,” the diplomat said. “What we’re trying, and have to do ... is to actually make these points even clearer than in the past.”

A proxy war is playing out in Yemen between Iran and US ally Saudi Arabia. A Saudi-led coalition intervened in Yemen in 2015, backing government forces fighting Iran-allied Houthi rebels. Iran has denied supplying the Houthis weapons.

After the Security Council voted on Monday, Iran’s mission to the United Nations accused the United States and Britain of misusing the council “to advance their political agenda and put the blame of all that happens in Yemen on Iran.”