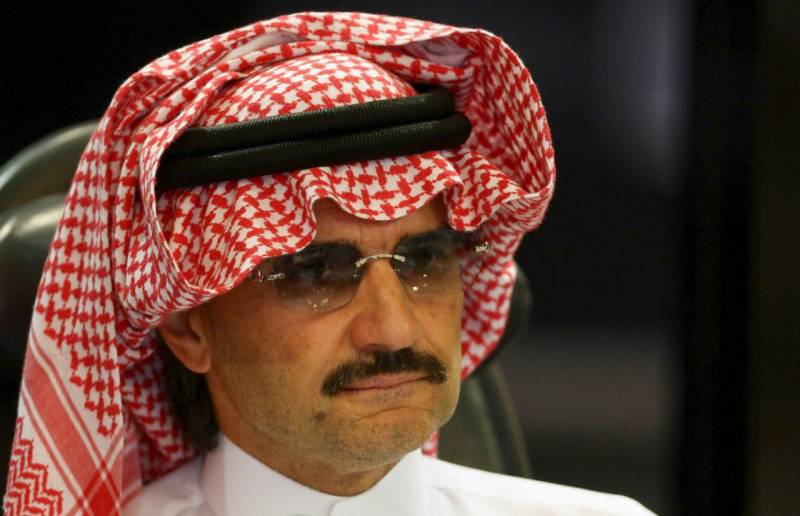 Riyadh (Reuters): Saudi Arabian billionaire Prince Alwaleed bin Talal, detained in the kingdom’s sweeping crackdown on corruption, said on Saturday that he expected to be cleared of any wrongdoing and released from custody within days, with his vast assets intact.

Prince Alwaleed was speaking in an exclusive interview with Reuters at his suite in Riyadh’s Ritz-Carlton hotel, transformed into a luxurious prison to hold tycoons and royals.

He has been confined there for more than two months along with dozens of other suspects, part of Crown Prince Mohammed bin Salman’s bold plan to consolidate control and reform oil superpower Saudi Arabia.

It was the first time the prince, one of the nation’s most prominent businessmen, has spoken publicly since his detention.

Prince Alwaleed said he was continuing to maintain his innocence of any corruption in talks with authorities. He said he expected to keep full control of his global investment firm Kingdom Holding Co 4280.SE without being required to give up assets to the government.

He described his confinement as a misunderstanding and said he supports reform efforts by the crown prince, known as MbS.

Prince Alwaleed was an early advocate of women’s employment in Saudi Arabia and a lifting of the ban on women driving. In September, King Salman ordered that the restriction should be lifted next year.

“There are no charges. There are just some discussions between me and the government,” he said in the interview, conducted shortly after midnight. “I believe we are on the verge of finishing everything within days.”

Prince Alwaleed appeared grayer and thinner than in his last public appearance, a television interview in late October, and had grown a beard while in detention.

“I have nothing to hide at all. I‘m so comfortable, I‘m so relaxed. I shave here, like at home. My barber comes here. I‘m like at home, frankly speaking,” he said.

“I told the government I’d stay as much as they want, because I want the truth to come out on all my dealings and on all things that are around me.”

The flamboyant prince, in his 60s, is the face of Saudi business for many foreigners, often appearing on international television covering his diverse investments and lifestyle.

A 30-minute interview, including a tour of his suite, was granted largely in order to disprove rumors of mistreatment and of being moved from the hotel to a prison.

Prince Alwaleed showed off the comforts of his gold-accented private office, dining room and kitchen, which was fully stocked with his preferred vegetarian meals.

In the corner of his office sat tennis shoes, which he said he used regularly for exercise. A television played business news programs, and a mug with an image of his own face on it was perched on the desk.

The release of Prince Alwaleed, whose net worth has been estimated by Forbes magazine at $17 billion, is likely to reassure investors in his global business empire as well as in the Saudi economy broadly.

Directly or indirectly through Kingdom Holding, he holds stakes in firms such as Twitter Inc (TWTR.N) and Citigroup Inc (C.N), and has invested in top hotels including the George V in Paris and the Plaza in New York.

Dozens of princes, senior officials and top businessmen were detained when Crown Prince Mohammed launched his purge in early November, shocking Saudis who never imagined the business elite or royalty could come under close scrutiny.

He is also known for his outspoken views on politics - making headlines in 2015 when he called Donald Trump a “disgrace” on Twitter during the U.S. election campaign.

The prince said he was able to communicate with family members and executives at his business during his time in detention.

Asked why he ended up held in the hotel and became one of its longest-serving detainees, he said:

“There’s a misunderstanding and it’s being cleared. So I’d like to stay here until this thing is over completely and get out and life goes on.”

“We have now a new leadership in Saudi Arabia, and they just want to cross all the Ts and dot all the Is. And I said: ‘Fine, that’s fine with me, no problem at all. Just go ahead.'”

Authorities said they aimed to reach financial settlements with most suspects and believed they could raise some $100 billion for the government this way - a huge windfall for the state, which has seen its finances squeezed by low oil prices.

In recent days there have been signs the purge is winding down. Several other prominent businessmen, including Waleed al-Ibrahim, owner of regional television network MBC, have been released, an official source told Reuters on Friday. Terms of any settlement were not revealed.

Prince Alwaleed said his own case was taking longer to conclude because he was determined to clear his name completely, but he believed the case was now 95 percent finished.

The prince said he was particularly upset by media reports that he had been sent to prison and tortured.

”It’s very unfortunate. I was planning to do an interview when I got out, which I think will be imminently.

“But I decided to accelerate the process and accept this interview today because these various rumors took place. They’re unacceptable completely. They are just a bunch of lies.”

After freedom, the prince said, he plans to continue living in Saudi Arabia and getting back to the high-paced and complex challenge of juggling his global interests.

“I will not leave Saudi Arabia, for sure. This is my country. I have my family, my children, my grandchildren here. I have my assets here. My allegiance is not on the table.”