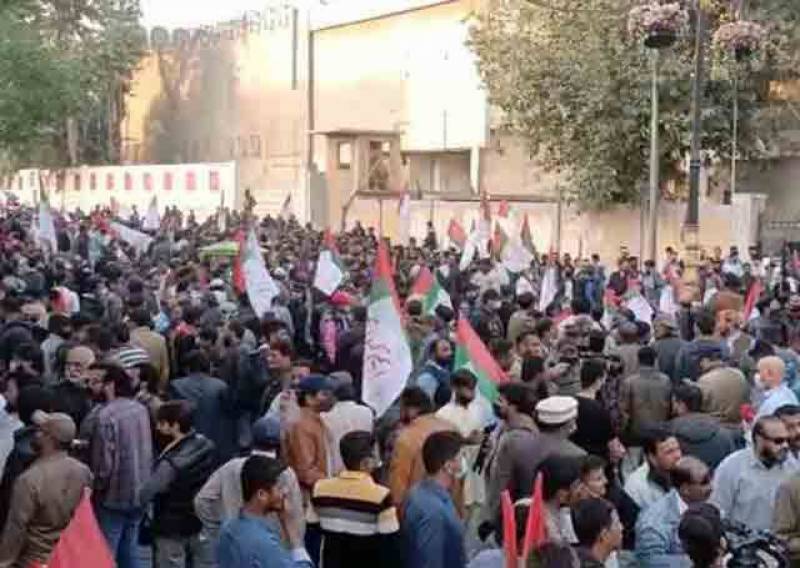 Karachi (Web Desk): A worker of Muttahida Qaumi Movement-Pakistan (MQM-P) lost his life and several others were injured after police baton-charged and tear-gassed them during a protest in Karachi against Sindh Local Government (Amendment) Bill at the Shahrah-e-Faisal on Wednesday.

According to the MQM-P spokesperson, a senior member of MQM-P North Karachi UC-5 joint organiser Aslam Bhai, who was injured in protest, succumbed to his injuries during treatment at Jinnah Postgraduate Medical Centre.

MQM-P workers and leaders had gathered in large numbers during the afternoon hours of Wednesday to stage a protest against the controversial local government bill.

Later on, the protesters attempted to move towards the Chief Minister's House for a sit-in. As a result, the flow of traffic was disrupted on the road.

The police, however, resorted to baton-charged and teargas shelling in an attempt to bar the protesters from entering the red zone.

A spokesperson of MQM-P said that several women and children participating in the protests also sustained injuries, while the police arrested several MQM-P leaders and workers.

Speaking to journalists after midnight, MQM-P's convener Khalid Maqbool Siddiqui said that a first information report (FIR) under a section of terrorism will be registered against Chief Minister Sindh Murad Ali Shah for the murder of party worker.

"This was not the first day of our protests but just the beginning," he said.

Siddiqui said that while the party had earlier announced a "Black Day" in Karachi today (Thursday), it will now observe a "day of mourning" (youm e soug) due to the death of the party worker.

The MQM-P leader said that Prime Minister Imran Khan and Interior Minister Sheikh Rasheed have taken notice of the incident, while federal ministers are looking into the matter as well.

On the other hand, while talking to newsmen Sindh Information Minister Saeed Ghani said that Pakistan Peoples Party (PPP) govt in the province always supported peaceful protests and provided space to rival parties for protest.

He said that the Jamaat-e-Islami was staging a sit-in outside the Sindh Assembly for the last 25-26 days and that showed the PPP’s ‘democratic’ approach that they did not want any restriction on political meetings.

“The MQM-P had announced that it would take out a rally from Sharea Faisal to the KPC but suddenly, they changed its route and moved towards CM House,” Ghani said.

He recalled that in recent past the rallies and sit-ins also took place outside CM House but the government did not take any action.

However, Wednesday’s situation was different because cricket teams playing PSL were staying at hotels nearby the protest venue and this had been declared as ‘high security zone’ where all such activities had been banned, the minister said.

Saeed Ghani said that the law enforcers feared that any untoward incident could occur resulting in adverse effects on the PSL matches and therefore, they took the action to disperse the protesters.

He admitted certain actions should not have taken place like the beating of women and one lawmaker of the MQM-P.

Meanwhile, many opposition parties on Wednesday condemned the police action against MQM-P protesters.

Leader of the Opposition in the Sindh Assembly Haleem Adil Shaikh also condemned the police action.

Sindh chief of Jamaat-e-Islami Muhammad Hussain Mehanti strongly condemned the police violence, baton charge and teargas shelling and termed it a violation of human rights and a cruel act.

He demanded that the provincial government immediately release all the arrested leaders and workers of the party.