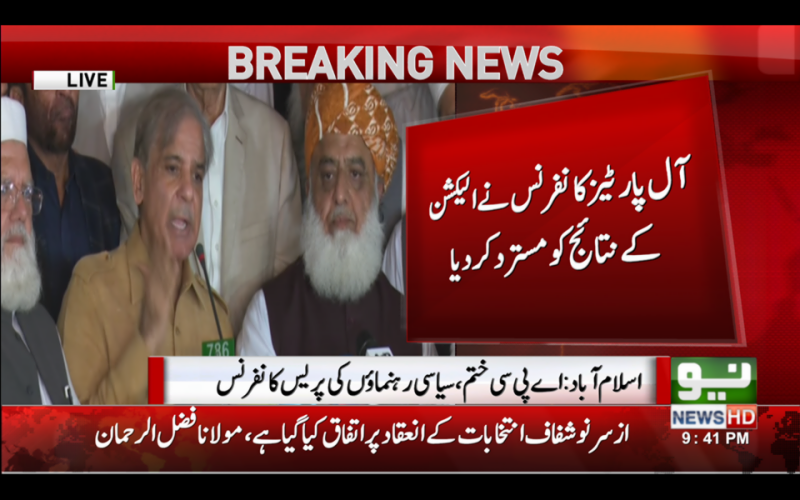 PML-N president Shehbaz and JUI-F chief Fazalur Rehman chaired the meeting. Both the leaders spoke to the media after presiding over the APC.

Addressing the press conference after the meeting, MMA chief Maulana Fazlur Rehman said many candidates were robbed of their mandate in the election.

“We have sacrificed so much for democracy to prosper in the country, he said.

The MMA chief that said the elected candidates of the parties whose leaders attended the MPC will not take oath.

He further said that they will organise protest demonstrations in different parts of the country till elections are held again.

Maulana Fazlur Rehman said that the parties which didn't attend the APC, would be contacted once again and asked to be a part of their struggle.

PML-N president Shehbaz Sharif said he has requested to be allowed to consult his party over the decision of the APC. He said

Maulana Fazlur Rehman while talking to media along with other MMA leaders on Thursday, alleged that his voters were stopped from casting votes and issuance of Farm 45 was delayed.

It is pertinent to mention that Imran Khan’s Pakistan Tehreek-e-Insaf (PTI) has emerged as the single largest Party in the National Assembly and it is going to form the next government at the Centre.

According to Election Commission, Pakistan Tehreek-e-Insaaf has so far secured 116 seats in the National Assembly followed by PML (N) 64, PPP 43, independents 14, Muttahida Majlis-e-Amal 12, MQM 06, Pakistan Muslim League 05 and 02 each by Balochistan National Party and the Grand Democratic Alliance.