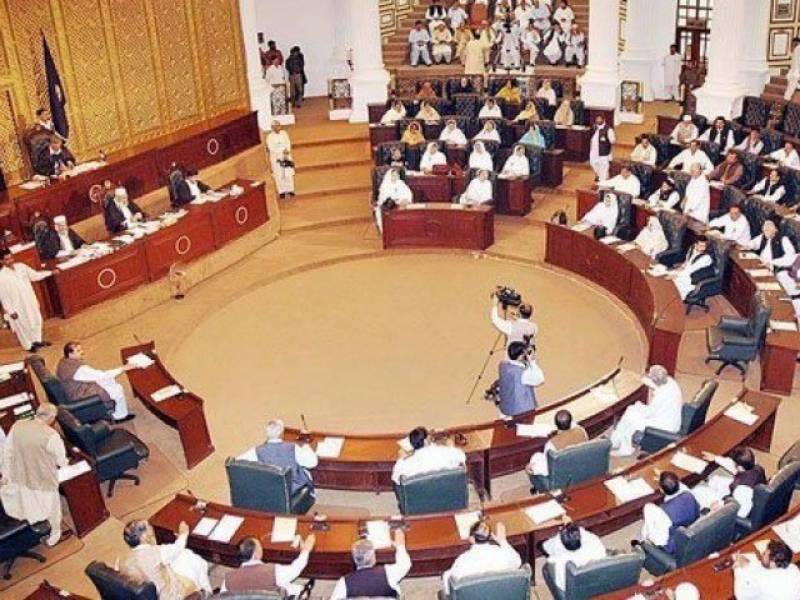 Peshawar (Staff Report/Agencies): Khyber Pakhtunkhwa Assembly has summoned a session at 2pm today (Sunday) where FATA merger bill is likely to be passed amid the reservations being expressed by the lawmakers of Jamiat Ulema-e-Islam Fazl and Provincially Administered Tribal Areas (PATA).

According to reports, at least 24 MPAs from Malakand Division have expressed their reservations over the content of the bill.

Meanwhile, at least two policemen have been injured in clashes outside K-P Assembly as members of JUI-F stages protest ahead of vote on legislation.

A heavy contingent of police, deployed around and inside the assembly, dispersed crowd with baton-charge and tear-gas. The K-P Police has managed to clear Khyber road. The security officials have also brought in water cannons for any untoward situation.

Under Article 139 (4) of the Constitution of Pakistan, the 31st Amendment Bill needs to be passed from the provincial assembly with two-third majority [83 votes] before sending it to the president for assent since it alters the limits of K-P.

FATA merger bill was approved in both upper and lower houses of the Parliament in a span of two days, May 24-25. Aimed to speedup mainstreaming of the tribal areas, the bill proposes merger of Fata with K-P within two years.

In the National Assembly, the bill managed to receive support from all major political parties with 229 lawmakers voting in its favour while only one, an ousted lawmaker of the PTI, voted against it. Two allies of the ruling party, the JUI-F and the Pashtunkhwa Milli Awami Party (PkMAP), and an independent member from Fata opposed the bill and staged a walkout during the session.

A day later, the Senate endorsed the bill and passed it with a significant majority – 71 senators voted in favour while five senators from PkMAP opposed it. The PkMAP leaders also staged a walkout.

The bill seeks to amend seven articles in the Constitution of Pakistan to allow implementation of proposed reforms. It seeks to omit paragraph C of sub-clause 2 of Article 1 under which Fata is placed as separate territory of the country like the four provinces. The omission will allow the tribal areas to merge with territory of K-P.

The bill proposes amending clause 1 of Article 51 by reducing the number of seats in the National Assembly from 342 to 326. It adds clause 3A after clause 3 to give legal cover to representatives who will be elected from Fata in the general polls 2018. They will continue as member of the National Assembly till the expiry of their five-year-term and after the five years, this new clause will stand omitted.

It also seeks removal of the word “Federally Administered Tribal Areas,” from the clause 5, under which seats of the National Assembly are allocated on population bases, and from sub-clause 1 of Article 155 which deals with the complaints and interferences with water supplies.

The bill pursues changes in Article 59, which deals with Senate, by reducing the number of Senate members from 104 to 96. It omits the sub-clause (b) of clause 1 that allocated eight members to the tribal areas.  It will also delete the sub-clause (b) of clause 3 of the same article which states that four senators elected from Fata shall retire after three years while another four after next three years.

Furthermore, it seeks omission of the word “Federally Administered Tribal Areas” from its sub-clauses (b) and (f) of Article 272 which defines the constitution of Senate.

It proposes omitting clause C of Article 246 which defines and names Fata and seeks addition of clause D which states that laws applicable in these areas will remain applicable until repealed or changed by competent authority.

Under Article 247, the competent authority will be the federal government until after the elections when the jurisdiction for altering and repealing the laws prevailing in these areas will be passed to the assembly.