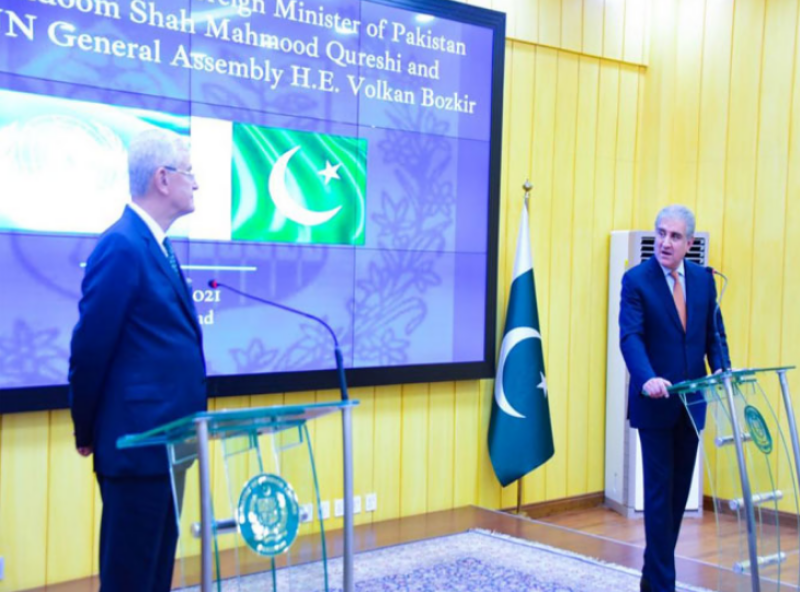 Islamabad (Web Desk): Foreign Minister Shah Mahmood Qureshi on Thursday called upon the United Nations (UN) to play its role for resolution of Palestine and Indian Illegally Occupied Jammu and Kashmir (IIOJK) which are on the agenda of the UN Security Council (UNSC) for over seven decades.

Addressing a joint news conference along with UN General Assembly (UNGA) President Volkan Bozkir after talks in the federal capital, he said that said there are similarities between Palestinian situation and that of Jammu and Kashmir.

“The oppressed peoples in both the territories faced with the worst form of human rights violations are demanding their right to self-determination,” FM Qureshi said.

He categorically stated that IIOJK dispute is a reality and nobody can remove it from the agenda of the UNSC.

The foreign minister said Pakistan expects the UN to continue to play its leadership role for the revival of peace process in the Middle East.

He said the fire there can be extinguished through dialogue and a two state solution in accordance with the UNSC resolutions.

“Timely humanitarian assistance should also be provided to the Palestinians affected by the Israeli aggression,” FM Qureshi said.

Shah Mahmood Qureshi said Pakistan has supported the Afghan reconciliation process and will continue to do so.

He said Pakistan is supportive of Istanbul process and international conference that should take place at the earliest in Istanbul.

The UNGA president appreciated Pakistan's efforts for peace and stability in Afghanistan.