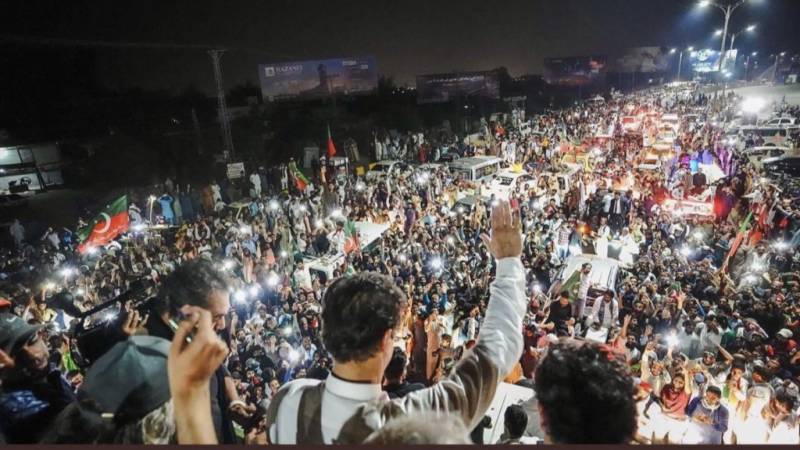 Islamabad/Rawalpindi (Staff Report/Agencies): Islamabad police on Thursday registered separate cases against at least 150 people including PTI Chairman Imran Khan, Asad Umar, Asad Qaiser and others of his party over allegations of arson and vandalism, in the wake of the party’s Azadi march.

In the twin cities of Rawalpindi and Islamabad, capital police registered at least three cases against PTI leaders and activists for putting up resistance against law enforcers and damaging state property.

Two FIRs were registered at Kohsar police station over the complaint of Sub-Inspector Asif Raza and Sub-Inspector Ghulam Sarwar under Sections 109 (abetment), 148 (rioting armed with deadly weapon), 149 (unlawful assembly), 186 (obstructing public service), 188 (disobedience), 353 (assault on public servant), 427 (causing damage) and 435 (mischief by fire or explosive substance with intent to cause damage) of the Pakistan Penal Code.

In the other FIR, SI Sarwar stated  that he and other police officers were on duty at Express Chowk when at 12:30am, around 100-150 PTI protesters, equipped with rods and inflammatory material, chanted slogans, incited people and set fire to the trees and Metro Bus station near Geo Chowk. He added that the protesters also smashed the mirrors of the office of a private TV news channel.

“I had decided that I will sit here until the government dissolves assemblies and announces elections, but of what I have seen in the past 24 hours, they (govt) are taking the nation towards anarchy,” he said, claiming that the government was also trying to create a divide between the nation and police.