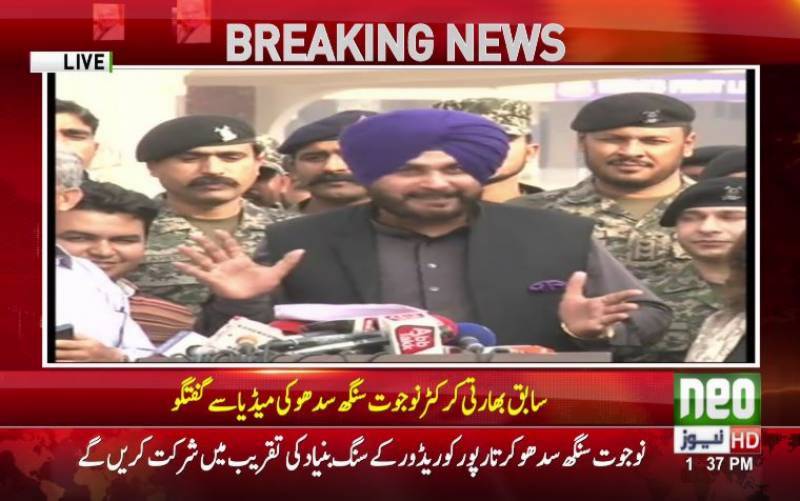 Lahore (Staff Report): Navjot Singh Sidhu on Tuesday arrived in Lahore to attend the groundbreaking ceremony of the Kartarpur corridor to be held on November 28 (Wednesday).

While speaking to journalists upon crossing the Wagah border, Sindhu thanked Prime Minister Imran Khan for inviting him to the groundbreaking ceremony of the Kartarpur corridor. “The seed that Imran Khan sew three months ago has become a tree now and me and 120 million Sikhs could not be happier. I want to thank Pakistani prime minister and officials,” he said.

“Karturpur corridor will prove to be a path of peace and instead of 60 years, happiness can come in six months through it. This corridor will be the reason that borders between both the countries open,” Sidhu added. He said that he was bringing a message of love and peace.

Prime Minister Imran Khan will perform the groundbreaking of the corridor on Wednesday (Nov 28) in Narowal.

The proposal to construct the corridor providing visa-free access to Sikh pilgrims was renewed by Army Chief Gen Qamar Javed Bajwa in August this year.

The 4-km-long corridor will connect Dera Baba Nanak in India’s Gurdaspur district with Gurdwara Kartarpur Sahib in Pakistan. The corridor will provide visa-free access to the Indian Sikh pilgrims to the shrine.

More than 3,000 Sikh pilgrims arrived in Lahore from India via special trains on Wednesday to celebrate the 549th birth anniversary of Baba Guru Nanak Dev Ji from November 21-30.