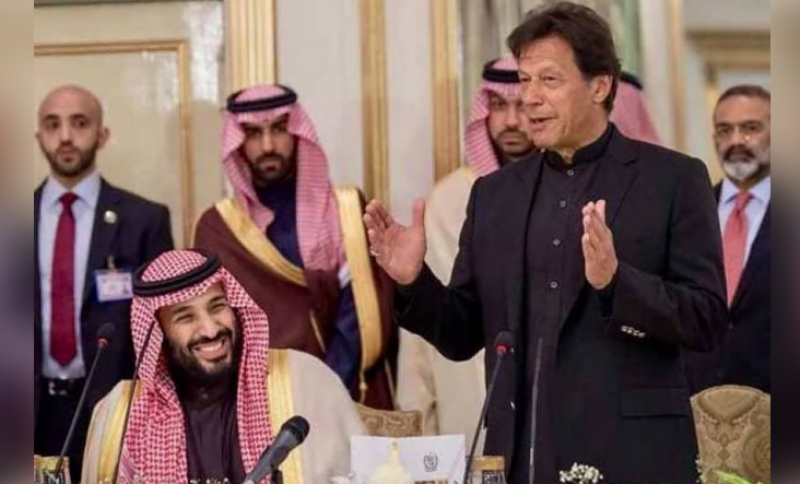 In a tweet on Wednesday, the premier said that Saudi Arabia has supported Pakistan in difficult times including now when the world confronts rising commodity prices.

I want to thank HRH Prince Mohammad bin Salman for supporting Pak with $3 bn as deposit in Pak's central bank & financing refined petroleum product with $1.2 bn. KSA has always been there for Pak in our difficult times incl now when world confronts rising commodity prices.

It is pertinent to mention here that Saudi Arabia's Fund for Development has announced to deposit $3 billion in the SBP to help the government support its foreign currency reserves and face the repercussions of Corona pandemic.

According to the Saudi Press Agency, this deposit is in addition to an oil deferred payment facility of $1.2 billion for petroleum products during the year.

The development comes following a three-day visit of Prime Minister Imran Khan to Saudi Arabia, where he held meeting with Saudi Arabia’s Crown Prince Mohammed bin Salman on the sidelines of the Middle East Green Initiative (MGI) Summit in Riyadh.

The news was confirmed by Information Minister Fawad Chaudhry and Minister for Energy Hammad Azhar.

This will help ease pressures on our trade and forex accounts as a result of global commodities price surge," Hamad wrote.

The Saudi Development Fund has generously announced for Pakistan an oil deferred payments facility of $1.2bn/annum and a $3 bn deposit with SBP. This will help ease pressures on our trade & forex accounts as a result of global commodities price surge.

Meanwhile, addressing a news conference alongside Energy Minister Hammad Azhar, Adviser on Finance Shaukat Tarin said Saudi financial support package of $4.2 billion is for one year and will prove to be useful especially when rupee is under pressure and international oil prices are soaring.

He said the package includes $3 billion dollars in deposits with State Bank of Pakistan and 1.2 billion dollars’ worth of oil supplies on deferred payments.

The adviser said that during talks in Saudi Arabia, Crown Prince Mohammad Bin Salman expressed his happiness to extend the support to Pakistan. He said the Saudi Crown Prince said Pakistan holds a special place for the Kingdom.

Responding to a question, Shaukat Tarin emphatically stated that the Saudi package has no connection with the International Monetary Fund (IMF) programme.

He was confident that the IMF will also revive its loan facility for Pakistan saying it will have a positive impact on our market.

In his remarks, Minister for Energy Hammad Azhar said that our oil prices are lower in the world except the ones producing oil.

“To keep the prices on the lower side, we have given tax exemption of Rs450 billion,” the minister said, adding that said it is expected that the commodity prices will see declining trend in the next six months and the benefit will be passed on to the masses.