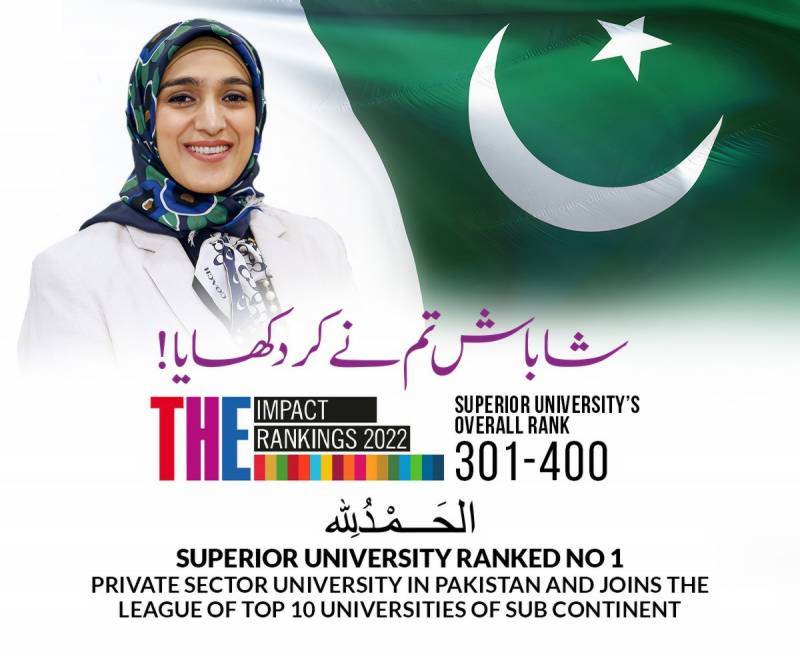 Lahore (Web Desk): It is great news for Pakistanis that in the Times Higher Education Impact Ranking 2022, which is considered to be the most authoritative body to asses university ranking in the world, has declared Superior University as the number one in Pakistan's private sector universities.

According to the details, the world’s most authoritative “Times Higher Education” Impact Ranking 2022 has been released in Stockholm, Sweden, according to which Superior University has been honoured as the top tenth university in the region.

Times Higher Education’s “Impact Ranking 2022” has ranked Superior University as one of the top 300 to 400 universities in the world and Pakistan’s number one university in the private sector.

Furthermore, Superior University has also grabbed the title of Top Ten University in the region.

The credit for this remarkable achievement goes to Rector Superior University, Dr. Sumaira Rehman, who took the unique initiative of the 3U, 1M programme to ensure employment through education.

Under the Three U, One M program, students study at the university for three years and work in the market for one year.

Having the honour of being the youngest female rector of Pakistan, Dr. Sumaira Rehman has brightened the country's name all over the world by receiving many national and international awards.