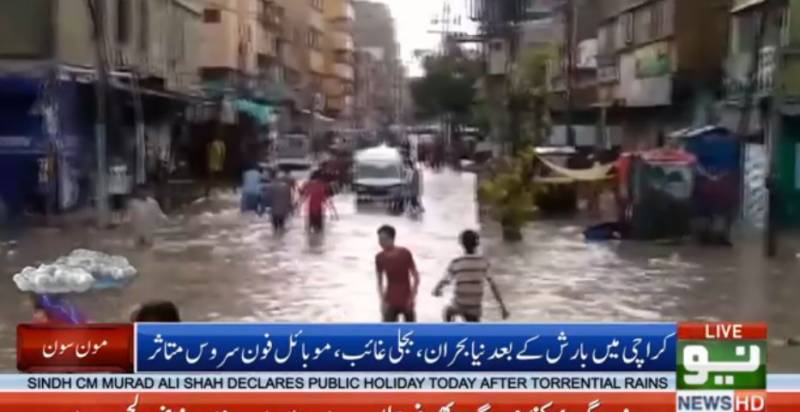 Karachi (Staff Report/Agencies): At least 25 people were killed in various rain-related incidents as the current spell of monsoon rains wreaked havoc in Karachi.

According to the rescue sources, the devastating rains have left most parts of the city flooded with water and no electricity while a large number of people were stranded due to roads becoming impassable and all the underpasses flooded with rain water.

It may be pointed out that the current spell of rain in the metropolis broke the record of maximum rain recorded in one day with 223 millimeter rain recorded in just 12 hours. The previous recorded was 211 mm in 24 hours in July 1967.

The PMD official said that Karachi had received unprecedented heavy rain due to the interaction of a monsoonal system in Sindh and a westerly wave from Balochistan on Thursday.

Meanwhile, Pakistan Army, Navy, Sindh Rangers and other civic agencies are busy in draining the water and helping people affected during the rain-hit areas in the metropolis.

Pak Army has established a Flood Emergency Control Centre to deal with flood relating emergencies while medical camps have also been established in the areas of Gulberg, Liaquatabad and New Karachi.

Moreover, Sindh Chief Minister Murad Ali Shah has announce a public holiday on Friday (today) due to rain in several cities and towns of the province.

A statement issued by his office said all government, semi-government and private institutions except essential services will remain closed only in Karachi on Friday.

The provincial government has asked the people to stay put and follow the safety measures and precautions to stay safe in these troubling times.