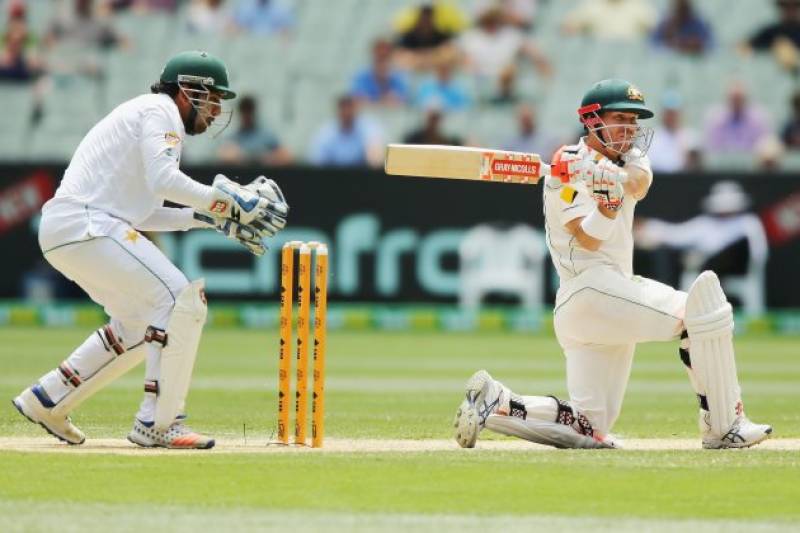 Melbourne (Web Desk): Australia were 278 for two after day three in the second Test in Melbourne Wednesday after Pakistan declared at 443-9.

David Warner slammed 144 off 143 balls with Usman Khawaja still at the crease on 94 with skipper Steve Smith on 10 to trail the tourists by 165 runs.

Azhar Ali had hit an unbeaten 205 in Pakistan’s first innings, which was declared closed shortly after lunch.

Pakistan declared their first innings closed at 443 for nine wickets after lunch on day three of the second test against Australia on Wednesday.

Azhar Ali finished unbeaten on 205 after Wahab Riaz fell for one, caught and bowled by paceman Josh Hazlewood for his 100th test wicket.

Azhar’s double-century, the highest score by a Pakistan cricketer in Australia, put the tourists well in front but their chances of forcing a result have been reduced by the rain that disrupted the opening two days.

Pakistan captain Misbah-ul-Haq had won the toss and elected to bat in the second Test.

The Green shirts made one change, with right-arm paceman Sohail Khan replacing left-armer Rahat Ali while the hosts fielded the same squad who beat Pakistan by 39 runs at Gabba.