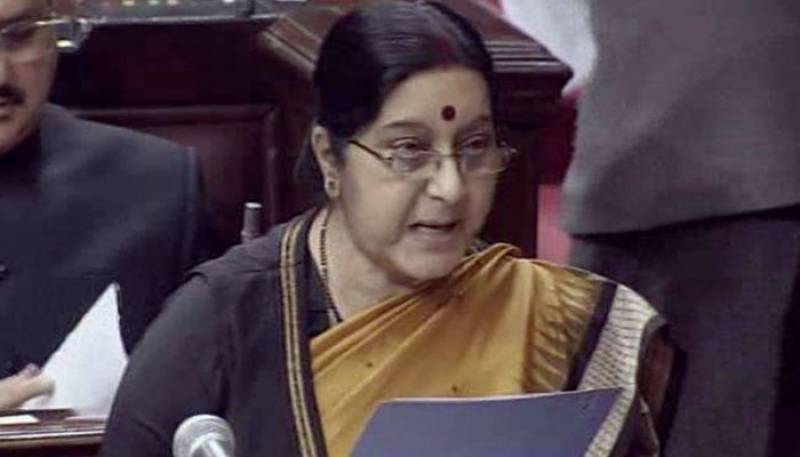 Swaraj claimed while speaking in the Indian parliament after submitting a report on the meeting, the visit was used by Pakistan for propaganda purposes.

On December 25, Jadhav’s mother and wife met him at the Pakistani Foreign Office in Islamabad. The meeting was allowed by Pakistan on humanitarian grounds.

According to Swaraj, Jadhav’s family was harassed and the spy’s wife and mother were shown as widows by removing their mangalsutras, bindiyas and bangles.

Moreover, Swaraj said if there was a camera in Jadhav's wife’s shoes, it should have been shown to the media.

According to reports in the Indian media, Jadhav confessed to his role as an Indian spy and terrorist during the recent meeting with his mother and wife at Pakistan Foreign Office.

During the meeting with his mother Avanti and wife Chetna on December 25 in Islamabad, Jadhav admitted he was an Indian spy and had engineered a spate of terror attacks on Pakistani soil, the Times of India reported.

"But why are you saying all this? You were doing business in Iran from where you were abducted. You must tell the truth," his mother grilled him after Jadhav greeted the two women by confessing that he was, as his charge sheet read, indeed an Indian spy and a terrorist.

The meeting lasted almost 40 minutes, the Pakistan Foreign Office said. Indian diplomats, including Deputy High Commissioner JP Singh, accompanied Jadhav's family and were present during the meeting, which was conducted in a specially prepared room via an intercom through a glass partition.