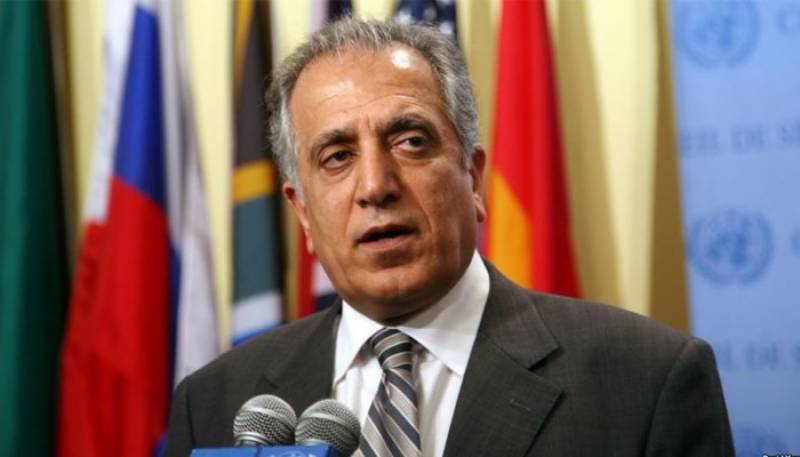 Kabul (Web Desk): Zalmay Khalilzad, who was named by President Donald Trump’s administration to find a way out of Afghan war, has shared details of his latest round of talks with the Taliban in Qatar with President Ashraf Ghani and other government officials in Kabul, a statement from the president’s office said Monday.

The statement quoted Zalmay Khalilzad as saying that he had discussed a cease-fire deal with the Taliban but that there was no progress so far on the issue. Khalilzad did not confirm the statement and there was no immediate comment from the US Embassy.

Monday’s statement from Afghan President Ashraf Ghani’s office also claimed that the Taliban demanded from Khalilzad the withdrawal of all foreign troops from Afghanistan, but that there was also no agreement on that issue.

The statement appeared directed at toning down last week’s remarks by Khalilzad that reported “significant progress” in talks with the Taliban.

During the meeting with Ghani, Khalilzad rejected media reports claiming he and the Taliban discussed the formation of an interim administration in Afghanistan, said the statement. It added that Khalilzad has no authority to discuss such issues but that his goal is to facilitate an intra-Afghan dialogue — meaning direct talks between the Taliban and Kabul.

The statements also said Ghani thanked Khalilzad for his efforts and praised US endeavors to restart negotiations between the Afghan government and the Taliban.

On Saturday, after six days of meetings with the Taliban in Qatar, Khalilzad on his official twitter account said: “Meetings here were more productive than they have been in the past.”

“We made significant progress on vital issues,” he tweeted, without offering details.

Abdul Hakim Mujahid, a former Taliban official and currently a member of the High Peace Council, an independent body of clerics and respected Afghan figures, said he believes the Qatar talks resulted in a “good understanding between both sides” but that more discussions are needed in the coming weeks or months.