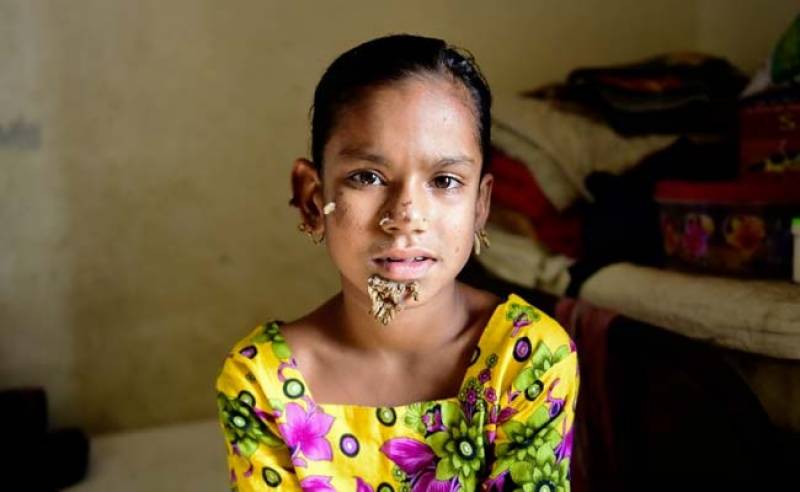 Dhaka: The young Bangladeshi girl who was diagnosed with a rare condition known as “tree man syndrome” has left hospital, her father told AFP Monday, saying he feared she would never be cured.

The 10-year-old is believed to be the first female in the world to suffer from the condition, also known as “tree man syndrome”, and was being treated for free by the Dhaka Medical College Hospital.

Surgeons operated on Sahana Khatun last month and removed some of the bark-like growths she has developed from the extremely rare condition of epidermodysplasia verruciformisa.

Doctors hailed the initial surgery as a success, but Sahana’s father Mohammad Shahjahan said it had only aggravated her condition and he wanted to spare her from further procedures.

“They removed the bark-like growths and they grew again more thick and strong,” he told AFP.

“I am scared. They said my daughter needed another 8-10 operations. But what’s the guarantee that she will be cured after that.”

Samanta Lal Sen, head of the hospital’s burns and plastic surgery unit, said he had wanted to keep the girl in hospital for further surgery but her father, a poor labourer, refused.

“He left with his daughter, complaining there was no progress. We asked them to stay a few more weeks for treatment,” Sen told AFP.

Fewer than half a dozen people are known to suffer from the syndrome, among them 27-year-old Bangladeshi rickshaw-puller Abul Bajandar.

He has undergone at least 21 surgical procedures to remove huge growths each weighing five kilos (11 pounds), and doctors believe he may be the first sufferer to be cured.

Sahana’s father, a widower, said he had also struggled financially during her treatment.

“I had to remain at her side without going to work. I didn’t have any money to feed her properly,” he said.

“She’s the only family I’ve got left and I don’t want to see her sadly sitting in a hospital bed.”