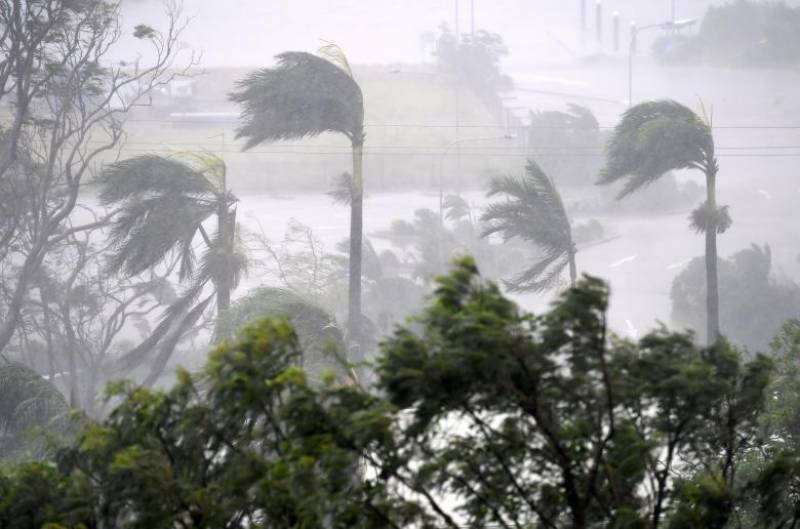 Sydney, Australia (Reuters): Coastal areas in northeast Australia were battered by high winds and heavy rainfall on Tuesday as a powerful cyclone, which prompted authorities to urge some 30,000 people to evacuate, hit island resorts along the world-famous Great Barrier Reef.

Cyclone Debbie was upgraded overnight to a category four storm, just one rung below the most dangerous wind speed level. Authorities warned it could reach level five by the time it makes landfall around 2 p.m. local time (0300 GMT).

Wind gusts of more than 220 km per hour (135 mph) lashed resorts in the Whitsunday Islands, where tourists waited out the storm in hotel rooms.

Queensland Police Deputy Commissioner Steve Gollschewski told Australian Broadcasting Corporation television, "We're getting some reports already of roofs starting to lift, including at some of our own facilities in the Whitsundays."

Authorities stockpiled food and fuel, and the army was on standby to deal with the aftermath. However, as winds cut power to about 23,000 people, emergency response crews were also hunkered down until the storm blew over.

It was expected more would lose power as the storm moved slowly across populated areas.

Although the storm was moving slower than first predicted, it is still the most powerful to hit the tropical state of Queensland since Cyclone Yasi destroyed homes and crops and devastated island resorts in 2011.

Senior forecaster Adam Blazak said, "The eye itself is probably 50 km (30 miles) across."

Authorities urged thousands of people in low-lying areas at risk from tidal surges and winds of up to 300 kph (185 mph) to flee their homes on Monday, in what would be the biggest evacuation seen in Australia since Cyclone Tracy devastated the northern city of Darwin in 1974.

However, police told Reuters they were not sure how many people had heeded that advice. Only about 400 people came to cyclone shelters as the winds gathered strength and made venturing outside dangerous.

Police blamed the wild weather associated with the storm for a traffic accident on Monday in which a 31-year-old female tourist was killed.

Ports at Abbot Point, Mackay and Hay Point were shut, Townsville airport was closed and airlines Qantas, Jetstar, Rex and Virgin Australia canceled several flights to and from the region.

BHP Billiton and Glencore halted work at their coal mines in the storm's path.

Jan Clifford, who plans to ride out the storm at her home in Airlie Beach, said the power was out, her fence had blown away and huge trees had been uprooted.

She told Reuters by telephone, "Our houses are built to take this stuff; it's just what you do. It's where you live and it is what it is."