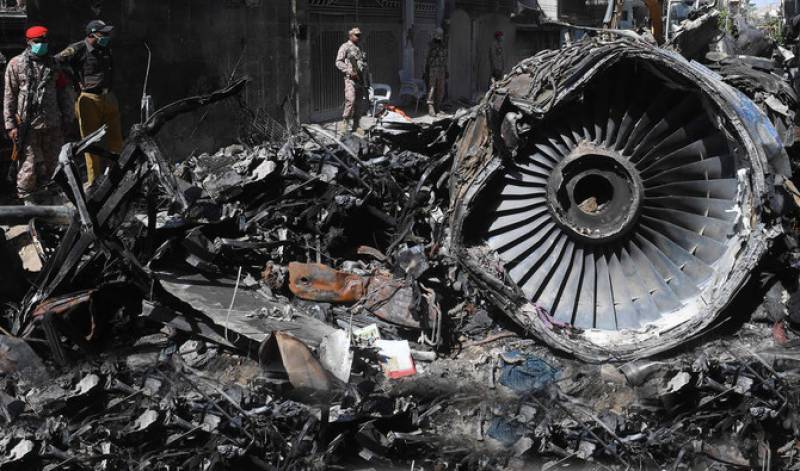 Karachi (Web Desk): The cockpit voice recorder (CVR) of the Pakistan International Airlines (PIA) plane, which crashed in Karachi on May 22, has been recovered from the rubble.

Meanwhile, Aviation Minister Ghulam Sarwar Khan on Thursday said that provisional investigation report of PIA airplane crash will be put before the cabinet and public on June 22.

Addressing a media briefing in Islamabad, he said investigation process will be free, fair and transparent and without any influence.

He said the report will not give reprieve to any person responsible for the incident. He said investigation board has the authority to include any stakeholder during investigation.

The minister said recorders for voice conversation and data have been recovered which will be taken to France by an Airbus team for decoding and further analysis.

On Wednesday, the process of removing the wreckage of the plane that crashed last week in the metropolis' Model Colony started, with the exception of the airliner's engine, landing gear, and avionics.

The removal of the wreckage commenced after permission from the Airbus investigation team that had arrived in Karachi on Tuesday. The experts have collected crucial evidence from the crash site as well.

Heavy machinery trawlers and various other vehicles were being used to move the pieces, including cabin and tail of the crashed plane; however, its engine, landing gear, and avionics were left behind until the Airbus' team of experts completed their work.

On May 22, PIA’s passenger plane Airbus A320, PK 8303, carrying 91 passengers and 8 crew members, was flying from Lahore to Karachi when it crashed at the Jinnah Garden area near Model Colony in Malir. Of the 99 people aboard, 97 were killed and only two passengers survived the tragic incident.