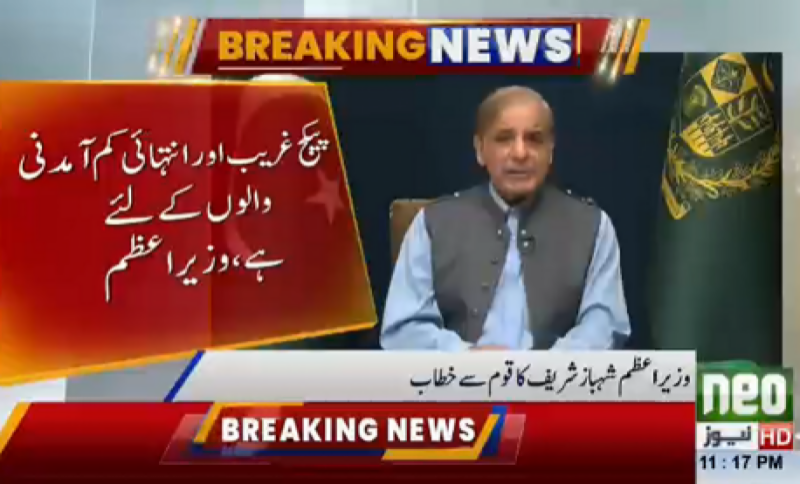 Islamabad (Web Desk): Prime Minister Shehbaz Sharif on Friday announced a new relief package worth Rs28 billion per month to lessen the impact of increase in the prices of petroleum products on the low-income segment of the society.

In his televised address to the nation, the premier said that under the relief package, 14 million deserving families will be immediately provided Rs2,000 each, which will benefit 85 million people or one third of the total population.

Shehbaz Sharif said he has also directed Utility Stores Corporation to ensure provision of 10-kilogram flour bag at Rs400 across the country.

"Former Pakistan Tehreek-Insaf (PTI) government announced subsidy on petroleum prices for its political benefits without keeping in view the precarious situation of the national exchequer, putting the nation into severe economic crisis," he said.

The prime minister said that the last government added a huge burden of over Rs20,000 billion loan, which forms 80% of the total loan acquired over the past 71 years.

He added that the budget deficit for the current fiscal year is also estimated to be Rs5,600 billion, which is the country’s highest deficit.

Drawing a comparison with the last PTI government, Shehbaz Sharif said that former Pakistan Muslim League-Nawaz (PML-N) government led by former premier Nawaz Sharif had added 10,400 megawatts of electricity, spread a net of roads across the country provided the best public transport and kept inflation at the ever-lowest level.

"The masses are facing prolonged power outages because power plants of 7,500 megawatt were not functional and the last government had committed criminal negligence by not arranging fuel for power plants and by not undertaking maintenance of power plants which caused loadshedding, " he said.

PM Shehbaz announced to initiate a consultative process with all the political parties to ensure continuity of economic policies. He regretted that his suggestion of a charter of economy was rejected by the previous regime.

The prime minister said the last government destroyed economy, making people suffer due to high inflation and little employment opportunities. However, he expressed the commitment to work hard with the sole objective to take the country to progress and prosperity.

Referring to the foreign policy, Shehbaz Sharif said that the last four years also proved destructive for foreign policy with deterioration of relations with friendly countries, who always stood by Pakistan in difficult time. However, he said, the process of restoration of bilateral ties has begun.

Reiterating Pakistan's stance for durable peace in South Asia, PM Shehbaz said it is India’s responsibility to undo its unilateral and illegal steps of August 5, 2019 about Indian Illegally Occupied Jammu and Kashmir (IIOJK) so that meaningful talks could be initiated for resolution of Kashmir and other outstanding issues.

He said Pakistan was again facing the challenge of terrorism and "we are reviving national action plan in coordination with provinces to tackle the menace".

Shehbaz said the last government snatched the rights of media and curbed the freedom of expression and punished journalists and its critics.

Shehbaz Sharif said his government revoked a controversial media law recently as it was meant to snatch freedom of media.

The prime minister assured that the government would not compromise on the life and security of people.

He said the previous government left behind innumerable stories of corruption and with their behavior of victimization, anger and incivility, PTI leaders tore apart the social fabric and cultivated “a crop of hate”.

He said the former prime minister for the sake of his nefarious political designs, came up with the story of a false foreign letter.

However, the National Security Committee (NSC) categorically stated twice that there was no conspiracy behind the ousting of the former prime minister and Pakistan’s ambassador in the United States also rejected the story of conspiracy, Shehbaz Sharif explained.

"But the person was telling lies for his heinous political aims and was damaging Pakistan’s vital national interests," PM Shehbaz said, adding that if any person thought his arrogance was above the constitution and national institutions he was wrong.

The prime minister categorically stated that Pakistan will move on as per the constitution, not at the whims of any individual. He said protection of masses’ lives and properties is top priority of a government, and we will not make any compromise on it.

Shehbaz Sharif invited all the political forces to join hands to build Pakistan on the pattern where difference of opinion is welcomed; rights of women and minorities are protected, and labourer and farmer become prosper.