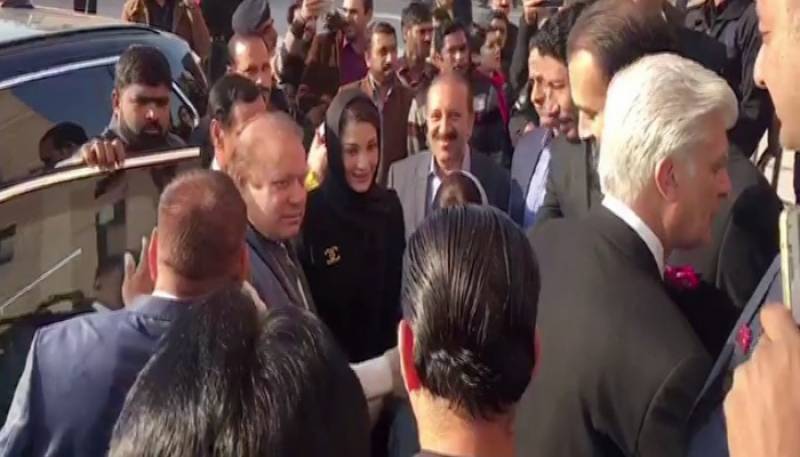 Islamabad (Staff Report): Accountability court on Tuesday, has adjourned the hearing of Azizia Steel Mills, London flats and Flagship Investment references against former prime minister and his family till December 4.

According to details, former PM Nawaz Sharif along with his daughter Maryam Nawaz and son-in-law Captain (r) Safdar reappeared in the court during which, Sharif’s lawyer Khawaja Harris told that Islamabad High Court (IHC) has reserved its verdict on a plea seeking to merge all three National Accountability Bureau (NAB) references.

He continued that no statement can be recorded until decision of IHC comes after which, the court adjourned the hearing without any proceeding.

The verdict over Sharif family’s petitions seeking to change exemption dates from December 5 to January 5, 2018 was due to be announced in today’s hearing while the witnesses of the prosecutor were also ready to record their statements.

Nawaz Sharif refused to talk to media, saying that the judge doesn’t like when he talks to journalists. The former premier said that he has many things to tell but he will reveal them in a day or two.

In the previous hearing, ousted premier and his family appeared in the court despite being granted exemption from personal appearance. Maryam Nawaz had submitted plea seeking to change exemption dates.

The former PM was indicted by the accountability court in the court on November 8 in all three corruption references separately. However, Nawaz denied all the charges pleading not guilty, saying that the proceeding was initiated on political basis.