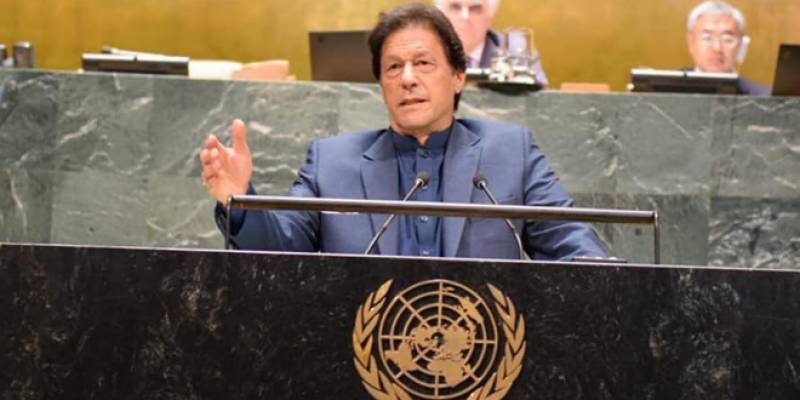 The PM spoke for 43 minutes extempore, out of which he devoted 25 minutes to the deteriorating human rights in Indian Occupied Kashmir that has heightened Pak-India tensions.

Imran Khan said the world community has a responsibility to ensure that Kashmiris get their right to self-determination as enshrined in several UN Security Council resolutions. He said it is not time to appease a market of 1.3 billion people but to take concrete action to avert a brewing humanitarian crisis.

The prime minister said if a conventional war starts between Pakistan and India, anything could happen. He said a country seven times smaller has only two choices; either to surrender or fight till end, and we will fight to the end.

“India's fifth August illegal action about occupied Kashmir is in violation of the UN Security Council resolutions, Shimla Agreement, and its own constitution”, the PM said.

Prime Minister Imran Khan said that the Kashmiris will never accept revocation of the special status of the disputed territory. He said hundreds of thousands of Kashmiris have been killed by the occupying forces and many women were raped over the past 30 years.

Voicing serious concerns over the situation in occupied valley, the PM said women, children and sick people are locked and being treated as worse than animals.

“Modi is not cognizant of the situation when curfew is lifted. Kashmiris will come out of their houses in protest and the 900,000 Indian troops in the held territory will shoot them, leading to a bloodbath”, the PM said.

“Indian Muslims, Pakistanis, Kashmiris and the entire Muslim Ummah are closely watching the grave situation in occupied Kashmir, and persecution of oppressed Kashmiris will contribute to their radicalisation,” Khan said.

PM Imran said that a Pulwama like incident may take place and India will blame Muslims and Pakistan for it; and the world should realize this apprehension.

Khan said first priority after assuming his office was to reach out to the neighbors, but unfortunately Modi never reciprocated his peace overtures. He said as a peace gesture we also returned India's pilot who was captured by Pakistan in response to Indian aggression in Balakot.

“India also tried to put Pakistan into the blacklist of Financial Action Task Force that is when we realized the agenda of the Modi regime,” the PM said.

“We rendered sacrifices of over 70,000 people and suffered an economic loss of 150 billion dollars. He said we were committed against the scourge of terrorism and did everything to dismantle their structure”

“We decided that there would be no militant organisation in Pakistan. Though India accuses Pakistan of terrorism, we ask the UN to send their observers to see for themselves what Pakistan has done,” the PM said.We also started fencing the border with Afghanistan, he added.

Speaking on the issue of climate change, Prime Minister Imran said that this issue is not of a single country but should be dealt with collectively.

“Our country is among the top 10 nations in the world, which are most affected by climate change,” he said.

He said Pakistan is mainly agrarian country and most of its water comes from the glaciers, which are melting at a rapid pace.

He warned if this keeps going and if nothing is done, humans will face a huge catastrophe. “I feel the UN must take leadership in this,” he said, adding that the great powers will have to step up.

Speaking on the menace of Islamophobia, the prime minister said that billions of Muslims are living as minorities in the western countries and since 9/11 the rise in Islamophobia is ‘alarming’. “Hijab has become an issue in some countries… it is seen as a weapon,” he said.

“There is no such thing as radical Islam,” said the prime minister, pointing out that all religions have individuals carrying out radical acts.

He said there should be an understanding for each other’s faiths, but they were seen as creating division among global population.

PM Imran regretted that Muslim leaders also did not play their role in sensitizing the world about the causes of radicalisation. He said we failed to tell the Western world that there is no such thing as radical Islam.

Raising the issue of corruption in poorer countries, the PM said another global problem is siphoning of money from developing world by the corrupt elite and reaching to advanced countries.

He said money laundering is not treated the same as money of drugs or terror financing.