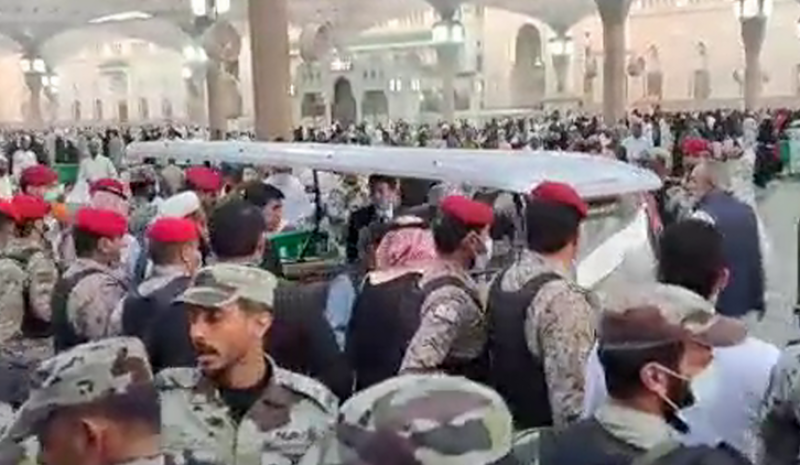 Islamabad (Web Desk): The Saudi authorities on Friday arrested some Pakistani pilgrims who chanted slogans against Prime Minister Shehbaz Sharif and his delegation at the Masjid-e-Nabvi in Madina,

According to the media director of the Embassy of Saudi Arabia in Islamabad, some Pakistanis have been arrested for violating the sanctity of the Masjid-e-Nabvi and an investigation has been launched into the matter.

On Thursday, Prime Minister Shehbaz Sharif along with his delegation arrived in Saudi Arabia on a three-day official visit at the invitation of Saudi Crown Prince Mohammad bin Salman bin Abdulaziz.

An unfortunate incident occurred when a group of Pakistani pilgrims chanted slogans at Prime Minister Shehbaz Sharif and his cabinet members at the Masjid-e-Nabvi in Madina as soon as they entered the mosque to pay their respects at the Roza-e-Rasool (PBUH).

When PM Shehbaz and his delegation arrived at the mosque, the protesters started chanting slogans of "chor, chor (thieves)" when they saw the premier and harassed and raised objectionable slogans against Federal Minister for Information Marriyum Aurangzeb.

Videos of the unfortunate incident have since gone viral on social media.

The protesters continued to film the entire episode with their mobile phones.

Reacting to the unfortunate incident, Marriyum Aurangzeb in a video message said that this act was perpetrated by a "select group", while most Pakistanis respected the sanctity of the holy mosque.

Following the incident, political and religious leaders and people belonging to different sections of society also expressed their outrage at the incident and strictly condemned the chanting of political slogans at Masjid-e-Nabwi.

Earlier in the day, Interior Minister Rana Sanaullah said that the government will request Saudi Arabia to take appropriate action against the elements that used indecent language in the premises of Masjid-e-Nabvi (PBUH).

Addressing a joint news conference along with Adviser on Kashmir Affairs and Gilgit-Baltistan Qamar Zaman Kaira in Islamabad, he said the act pained the entire Muslim Ummah and hence condemnable.

The interior minister said the Saudi government will also be requested to provide Pakistan identification of the culprits involved in this shameful act for action against them. He said an advice of the Law Ministry will be sought to proceed against such elements.

"Such elements should be deported as they must not be permitted to stay any more on the holy land," the minister said.

The interior minister said Imran Niazi should refrain from spreading anarchy and hatred in the country only to achieve his political objectives. He said the former prime minister is also targeting institutions for this purpose.

"Imran Khan will have to answer the people for his bad governance during the last four years," the minister said.

Qamar Zaman Kaira, in his remarks, also strongly condemned the despicable act by a handful of elements at the second most sacred place on the earth for Muslims.

He said Imran Khan must shun the practice of spreading hatred and creating divisions among the society for his vested interest. He said Imran Khan's politics is the politics of fascism with the belief that only he and his party have the right to live in this country.

Qamar Zaman Kaira said that nobody will be allowed to target the institutions.