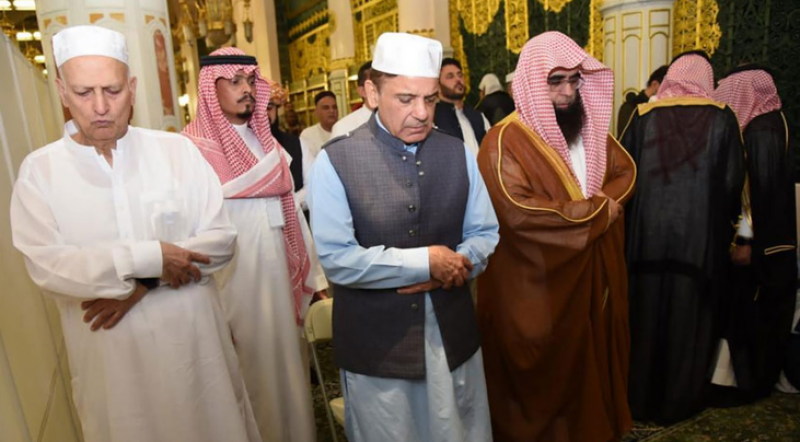 The prime minister also offered Nawafil at Masjid-e-Nabavi and prayed for the peace and prosperity of the country.

The members of delegation including Bilawal Bhutto Zardari, Ahsan Iqbal, Maulana Asad, Mohsin Dawar, Shahzain Bugti and others also offered Nawafil along with the prime minister.

Earlier, an unfortunate incident occurred when a group of Pakistani pilgrims chanted slogans at Prime Minister Shehbaz Sharif and his cabinet members at the Masjid-e-Nabwi in Madina as soon as they entered the mosque to pay their respects at the Roza-e-Rasool (PBUH).

When PM Shehbaz and his delegation to the mosque, the protesters started chanting slogans of "chor, chor (thieves)" when they saw the premier and harassed and raised objectionable slogans against Federal Minister for Information Marriyum Aurangzeb.

Videos of the unfortunate incident have since gone viral on social media.

The protesters continued to film the entire episode with their mobile phones.

Reacting to the unfortunate incident, Marriyum Aurangzeb in a video message said that this act was perpetrated by a "select group", while most Pakistanis respected the sanctity of the holy mosque.

Following the incident, political and religious leaders and people belonging to different sections of society also expressed their outrage at the incident and strictly condemned the chanting of political slogans at Masjid-e-Nabwi.

Prime Minister Shehbaz along with his delegation arrived in Saudi Arabia on Thursday on a three-day official visit at the invitation of Saudi Crown Prince Mohammad bin Salman bin Abdulaziz.