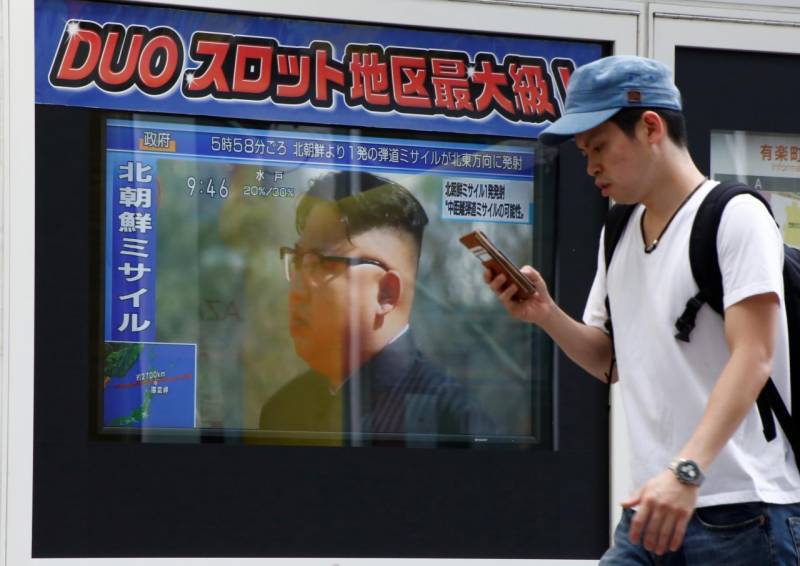 Tokyo (Reuters): North Korea fired a ballistic missile over Japan’s northern Hokkaido island into the sea early on Tuesday, prompting warnings for residents to take cover while provoking a sharp reaction from Prime Minister Shinzo Abe and other leaders.

The test, one of the most provocative ever from the reclusive state, appeared to have been of a recently developed intermediate-range Hwasong-12 missile, experts said. It came as US and South Korean forces conduct annual military drills on the peninsula, to which North Korea strenuously objects.

Earlier this month, North Korea threatened to fire four Hwasong-12 missiles into the sea near the US Pacific territory of Guam after US President Donald Trump warned Pyongyang would face “fire and fury” if it threatened the United States.

North Korea has conducted dozens of ballistic missile tests under young leader Kim Jong Un, the most recent on Saturday, but firing projectiles over mainland Japan is rare.

Abe said he spoke to Trump on Tuesday and they agreed to increase pressure on North Korea. Trump also said the United States was “100 percent with Japan”, Abe told reporters.

The United Nations Security Council would meet later on Tuesday to discuss the test, diplomats said.

“We will respond strongly based on our steadfast alliance with the United States if North Korea continues nuclear and missile provocations,” the South’s foreign ministry said in a statement.

South Korea and the United States had discussed deploying additional “strategic assets” on the Korean peninsula, the presidential Blue House said in a statement, without giving any more details.

“The US should know that it can neither browbeat the DPRK with any economic sanctions and military threats and blackmails nor make the DPRK flinch from the road chosen by itself,” North Korea’s official Rodong Sinmun said later on Tuesday, using the initials of the North’s official name, the Democratic People’s Republic of Korea.

North Korea fired what it said was a rocket carrying a communications satellite into orbit over Japan in 2009 after warning of its plans. The United States, Japan and South Korea considered it a ballistic missile test.

“It’s pretty unusual,” said Jeffrey Lewis, head of the East Asia Nonproliferation Program at the Middlebury Institute of Strategic Studies in California. “North Korea’s early space launches in 1998 and 2009 went over Japan, but that’s not the same thing as firing a missile.”