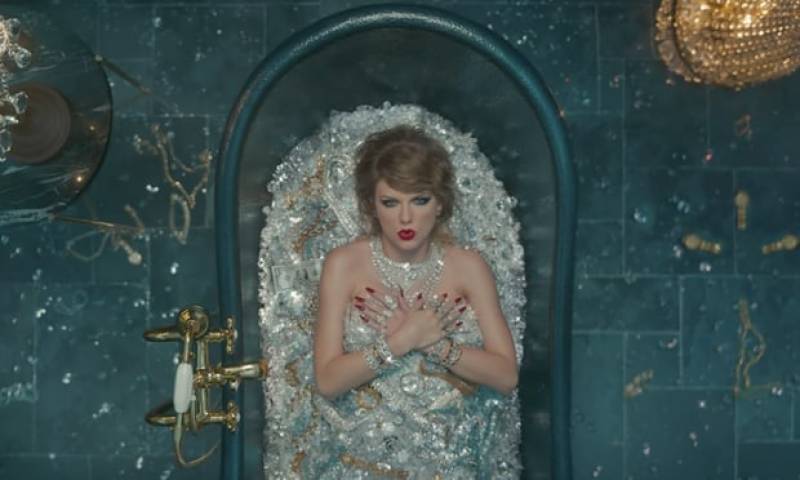 Loss Angeles (Web Desk): Hollywood singer Taylor Swift release a music video, for her new single, “Look What You Made Me Do,” that is another new record set by her

The video is practically boiling over with meta-commentary and self-referential detail, from an ongoing visual snake motif to a tombstone that literally reads “Taylor Swift’s reputation”. Yes, it’s painfully on-the-nose, but Swift’s brand hasn’t exactly been built on subtlety. The singer's new "Look What You Made Me Do" (LWYMMD) video is on track to break Vevo's 24-hour record, which was most recently held by Adele's "Hello" video.

Swift's first official Reputation-era music video is on its way to surpassing 30 million views in its first day of release, according to a press release issued by Vevo. The "Look What You Made Me Do" video, which premiered Sunday night, has been watched 1.5 million times every hour. Swift's "Look What You Made Me Do" single already set Spotify's global first-day record, with eight million streams on its date of release. The lyric video for the track topped YouTube's record for the most-viewed lyric video in 24 hours, with more than 19 million views. Her return single is also headed for No. 1 on next week's Billboard Hot 100 chart. The "Look What You Made Me Do" video was directed by Joseph Kahn, and the song was written and produced by Swift and Jack Antonoff. Swift's Reputation album is scheduled for a Nov. 10 release.