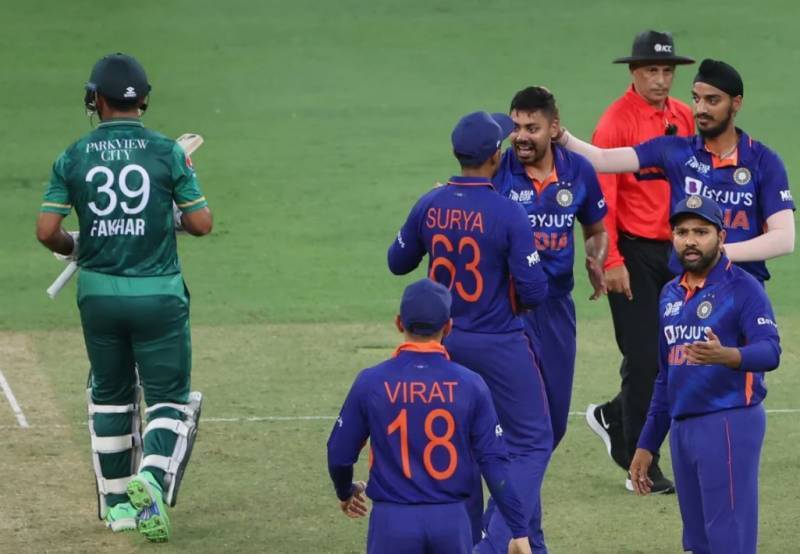 Dubai (Web Desk): India defeated Pakistan in the second match of Group A of the ICC T-20 Asia Cup 2022 at the Dubai International Cricket Stadium on Sunday night.

Indian captain Rohit Sharma won the toss and opted to bowl first in the highly-anticipated clash.

Batting first, Pakistan set a victory target of 148 runs for India in 19.5 overs.

Chasing the target set by the Pakistan team, India scored 148 in 19.4 overs with five wickets in hand.

Chasing the target, Ravindra Jadeja, who hit 35, and Pandya put on a key fifth-wicket stand of 52 as India reached their target with two balls to spare.

Pace bowlers Bhuvneshwar Kumar and Pandya shared seven wickets to set up victory for India in their opening match of the six-nation tournament after they bowled out Pakistan for 147.

Rizwan was the top scorer with 43 and Iftikhar chipped in with 28, although it was number 11 batsman Shahnawaz Dahani who drew the biggest cheers, thanks to his cameo of 16 runs off just six balls laced with two much-needed sixes.

Pacers did all of the damage for India, with Kumar, Pandya, Arshdeep and Avesh picking 4, 3, 2 and 1 wickets respectively.