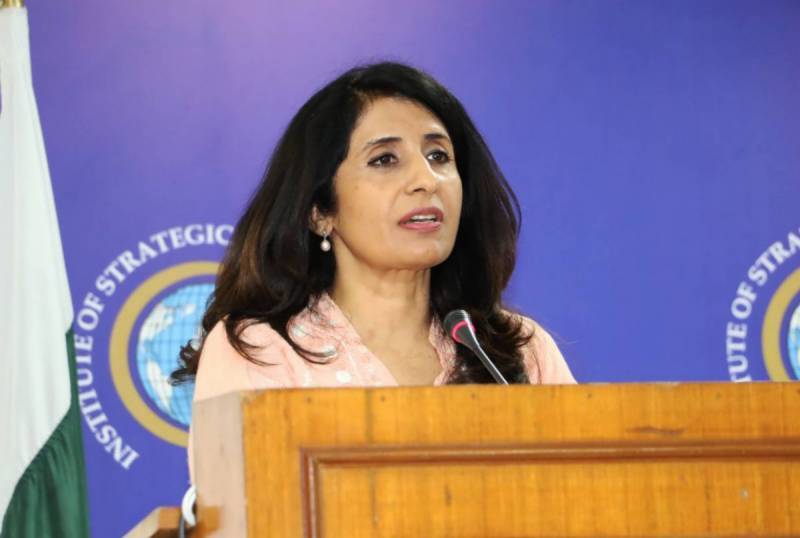 Responding to a query during a year-end briefing, Baloch said Pakistan has been engaging with Afghan authorities on all matters, including the situation on the border and security of diplomats and missions and the terrorist threat Pakistan faces from militant groups operating from Afghan soil.

Talking about India, she said Pakistan consistently maintained that bilateral relations cannot fully normalize until the resolution of the outstanding disputes, especially the core issue of Jammu and Kashmir.

She, however, said that a Hindutva inspired nationalist government in India continues to act as a regional bully and create hurdles in development of normal bilateral relations. She said suppression of minorities and the people of the Indian Illegally Occupied Jammu and Kashmir is a matter of great concern for Pakistan. She said Pakistan will continue to make all possible efforts for the settlement of Jammu and Kashmir dispute in accordance with the relevant UN Security Council Resolutions.

Replying to a question, Mumtaz Zahra Baloch said Islamabad wants India to end its suppression in IIOJK and desist from supporting terrorist activities inside Pakistan. She said Pakistan is interested in peace and dialogue and it is upto the Indian authorities to take a responsible position to improve relations.

Highlighting Pakistan’s relations with other South Asian countries Sri Lanka, Maldives, Nepal, Bhutan and Bangladesh, she said we are keen to strengthen the existing multifaceted cooperation with these countries. In this context, Pakistan Foreign Minister held important meetings with his counterparts of Bangladesh, Sri Lanka and the Maldives on the sidelines of important multilateral events and conferences.

About Pakistan-US relations, the Spokesperson said a positive momentum in the bilateral ties can be witnessed, especially with the visits of Foreign Minister Bilawal Bhutto Zardari. She said a Senate-confirmed Ambassador was appointed by the United States to Pakistan after four years. She added that the United States agreed to our long-standing request for provision of military hardware. She expressed the confidence that de-hyphenation of relations would further contribute to strengthening of our bilateral relations.

To a question about Foreign Minister Bilawal Bhutto Zardari's visits abroad, the Spokesperson said these tours are a demonstration of international community's interest to engage with Pakistan and to develop understanding on a range of issues. She said Pakistan is also very interested in expanding and strengthening its friendship around the world. She said with the enhanced interactions, visits and exchanges, we can strengthen our friendship, cooperation and dialogue with the international community.

Regarding Pakistan-Europe relations, Mumtaz Zahra Baloch said we continue to cooperate and engage with our partners in the continent on bilateral, regional and global issues of mutual interest.

She said our focus is to develop deeper economic collaboration, cooperate to confront climate change and find opportunities in higher education and employment. She said we are also engaged in discussions with the European Union on extension of GSP Plus Programme and on green partnerships for climate change.

Commenting on Pakistan's relations with African nations, the Spokesperson said ties Africa are seeing a positive trend in terms of bilateral trade and political, parliamentary, military and security cooperation. She said Pakistan opened new Missions in lvory Coast, Djibouti, Uganda and Ghana while Ethiopia opened its resident Embassy in Islamabad. She said our bilateral trade and business-to-business relations with Africa over the last six months have also registered record increases. Similarly, the remittances from Africa have reached a high of over 400 million dollars. She said PIA and Ethiopian Airline agreed for code-sharing which would directly connect Karachi with Addis Ababa.

Talking about Pakistan's achievements on the diplomatic fronts, the Spokesperson said Pakistan managed to come out of the FATF grey list in October this year. She said establishment of Fund for Loss and Damage at COP27 for developing countries is another significant achievement of Pakistan.

The Spokesperson further added that Pakistan follows a policy of enhanced engagements with its close partners and friends. She reinforced Pakistan's traditional partnerships with China, Türkiye, Saudi Arabia and the Islamic world. She said these relationships are based on mutual trust and friendship and characterized by a tradition of robust dialogue and exchange of bilateral visits.

Imran Khan to contest NA by-polls on all 33 seats

Commenting on Pakistan's relations with the Central Asian Republics, Mumtaz Zahra Baloch said Islamabad has developed close understandings with these countries to enhance regional connectivity and cooperation in energy, transport and infrastructure.