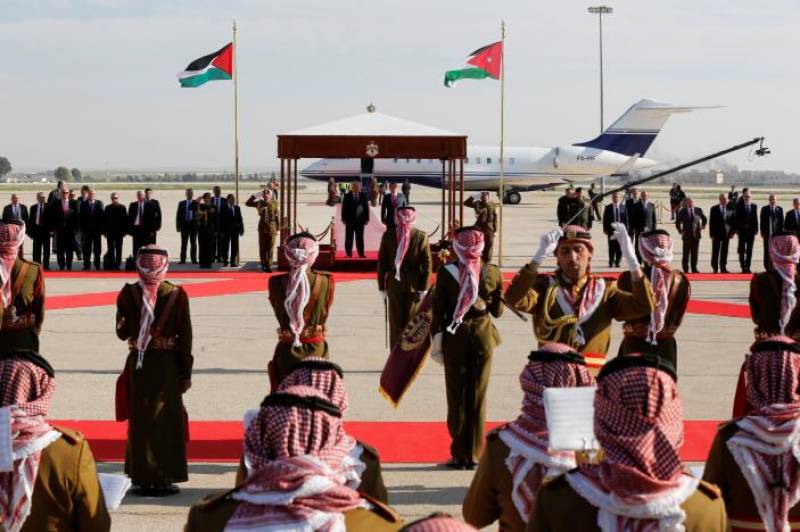 Dead Sea, Jordan: Divided Arab leaders arriving in Jordan for a summit on Wednesday are seeking mutual understanding to reaffirm their commitment to a Palestinian state, a longstanding goal that US President Donald Trump last month put into doubt.

The Dead Sea meeting is expected to have a bigger turnout than recent Arab summits, Jordanian officials say, and security forces cast a high profile in the capital Amman with armored vehicles standing at traffic junctions as leaders flew in.

While they are highly unlikely to bridge rifts over the regional role of Iran or intractable wars in Syria and Yemen, Arab leaders remain united in supporting a two-state solution to the Israeli-Palestinian conflict.

Palestinian Foreign Minister Riyad al-Maliki told Reuters, "We are concerned that there should be an Arab consensus on the Palestinian file so that this reflects clearly in the discussions of Arab states and their leaders with the new American administration."

Before taking office in January, Trump promised to move the US embassy in Israel from Tel Aviv to Jerusalem - something adamantly opposed by Arabs as tantamount, in their view, to recognizing Israeli sovereignty over Jerusalem.

The Palestinians want Arab East Jerusalem - which Israel captured in a 1967 war and later annexed in a move not recognized internationally - as the capital of a future state encompassing the Israeli-occupied West Bank and the Gaza Strip.

Israeli-Palestinian peace talks have been frozen since 2014.

Trump also, during a White House news conference with Israeli Prime Minister Benjamin Netanyahu last month, indicated he was open to a one-state solution to the conflict.

That would be deeply problematic for both sides, as it would mean either two systems for two peoples - something Palestinians would see as apartheid and endless occupation - or equal rights for all, which would compromise Israel’s Jewish character.

The Arab monarchs and presidents attending Wednesday's summit will meet at the Dead Sea, only a few km (miles) from the West Bank and with Israeli settlements visible to the naked eye.

The United States is sending a representative to the summit, Maliki said. Egyptian President Abdel-Fattah al-Sisi and Jordan's King Abdullah are both scheduled to meet Trump soon.

A draft resolution on Jerusalem and seen by Reuters will require all Arab states to respond to any move by any country to move its embassy there, without specifying the United States.

Jordanian Foreign Minister Ayman Safadi said, "The Palestinian issue is the central issue. It is the root cause of conflict in the region and its resolution is the key to peace and stability. We hope we will be able to again relaunch efforts that would get serious negotiations restarted again."

The biggest disagreement among Arab countries is over the regional role of Iran, an ally of Syria and Iraq and the Shi'ite Hezbollah movement that dominates Lebanon, but regarded by Saudi Arabia and some other Sunni Muslim states as a bitter adversary.

Shi'ite Iran and Saudi Arabia support opposing sides in the civil wars in Syria and Yemen, which have caused humanitarian catastrophes, and in political and factional disputes simmering for years in Bahrain and Lebanon.

Safadi said in a meeting with fellow foreign ministers before the summit, "We meet in a difficult Arab era dominated by crisis and conflicts that deprive our region of the security and stability they need to attain our people's rights."

A Jordanian official told Reuters that the final statement from the summit was expected to include a condemnation of Iran for what it called meddling in internal Arab affairs, and to call on it to refrain from using force or threats. Iran denies any such interference.

A summit meeting of the Organization for Islamic Cooperation included a similar line in its final statement last year.

Friction also smolders between Saudi Arabia, the richest Arab state, and Egypt, the most populous one - close allies for decades before the 2011 Arab Spring uprisings - over approaches to Syria's war and the demarcation of their marine border.

The kingdom's oil giant Saudi Aramco resumed petroleum shipments to Egypt earlier this month, suggesting relations may be improving, and Egypt's Sisi is hoping for a bilateral meeting with King Salman in Amman this week.

Mustafa Alani, an Iraqi security expert with close ties to the Saudi Interior Ministry said, "There could actually be a product of the Arab summit - a unified attitude towards Washington's policy in Palestine. They might disagree on all other issues, but I think this is the unifying one."