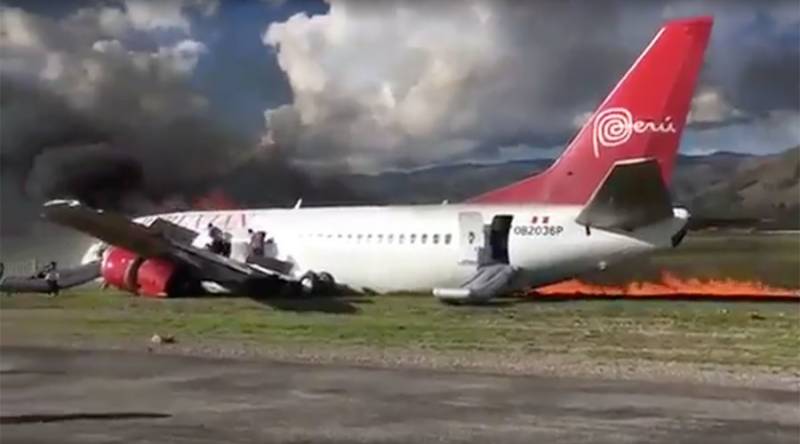 Lima, Peru (Reuters): A Peruvian Airlines Boeing 737 jet caught fire on Tuesday while landing at the Francisco Carle Airport in Jauja in central Peru after it swerved on the runway, but there were no serious injuries, a government minister said.

Peruvian Airlines said in a statement that the Boeing 737-300 jet drove off the runway for unspecified reasons during the scheduled landing, after swerving to the right. It said that all 141 people on board the flight, which originated in Lima, were evacuated safely.

Authorities are investigating the incident, which occurred about 4:30 p.m., involving the Boeing 737-300 jet at the high-altitude airport in an agricultural valley some 265 kilometers from Lima, the capital.

Interior Minister Carlos Basombrio said that the fire likely started when the wing scraped the runway.

Basombrio told reporters on local broadcaster RPP, "The plane couldn't stop on the runway and they made a maneuver to stop it with the wing and that appears to have caused the fire."

Television images showed a large cloud of black smoke streaming from an airliner in flames.

Boeing said it was aware of the reports of the incident and was gathering information.