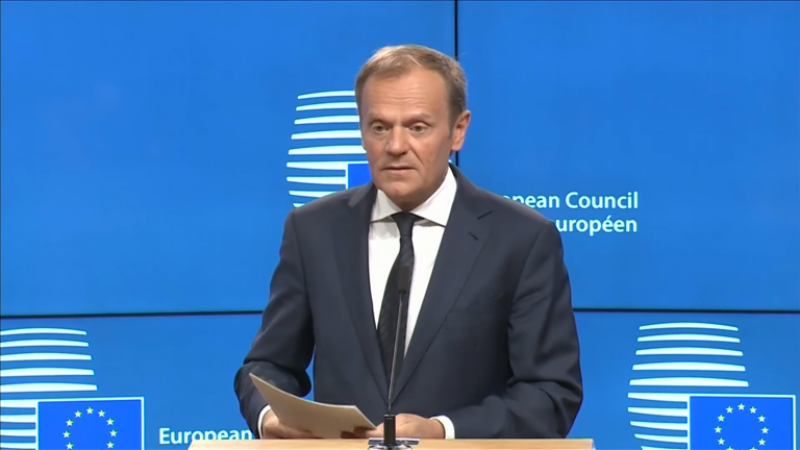 But the other 27 states are now more united and will protect their interests in "difficult negotiations' before Brexit in 2019, he added. Concluding his brief remarks to the media in Brussels, the former Polish prime minister said he had little to add about Britain but concluded: "We already miss you. Thank you and goodbye."

Prime Minister Theresa May filed formal Brexit divorce papers on Wednesday, pitching the United Kingdom into the unknown and triggering years of uncertain negotiations that will test the cohesion of the European Union.

Nine months after Britons voted to leave, May notified EU Council President Donald Tusk in a letter that the UK is quitting the bloc it joined in 1973. The prime minister, an initial opponent of Brexit who won the top job in the political turmoil that followed the referendum vote, now has two years to settle the terms of the divorce before it comes into effect in late March 2019.

“The United Kingdom is leaving the European Union,” May told lawmakers in the British parliament “This is an historic moment from which there can be no turning back.”

On the eve of Brexit, May, 60, has one of the toughest jobs of any recent British prime minister: holding Britain together in the face of renewed Scottish independence demands, while conducting arduous talks with 27 other EU states on finance, trade, security and other complex issues. The outcome of the negotiations will shape the future of Britain's $2.6 trillion economy, the world's fifth biggest, and determine whether London can keep its place as one of the top two global financial centres.

For the EU, already reeling from successive crises over debt and refugees, the loss of Britain is the biggest blow yet to 60 years of efforts to forge European unity in the wake of two devastating world wars. Its leaders say they do not want to punish Britain. But with nationalist, anti-EU parties on the rise across Europe, they cannot afford to give London generous terms that might encourage other member states to break away.

May's notice of the UK's intention to leave the bloc under Article 50 of the EU's Lisbon Treaty was hand-delivered to Tusk in Brussels by Tim Barrow, Britain's permanent representative to the EU. Barrow handed the letter to Tusk, the EU summit chair and former Polish prime minister, in the Council President's offices on the top 11th floor of the new Europa Building, according to a Reuters photographer in the room.

That moment formally set the clock ticking on Britain's two-year exit process. Sterling, which has lost 25 cents against the dollar since the June referendum, rose almost half a cent on the news of the Brexit trigger reaching highs of $1.2478. May signed the Brexit letter on Tuesday, pictured alone at the cabinet table beneath a clock, a British flag and an oil-painting of Britain's first prime minister, Robert Walpole.