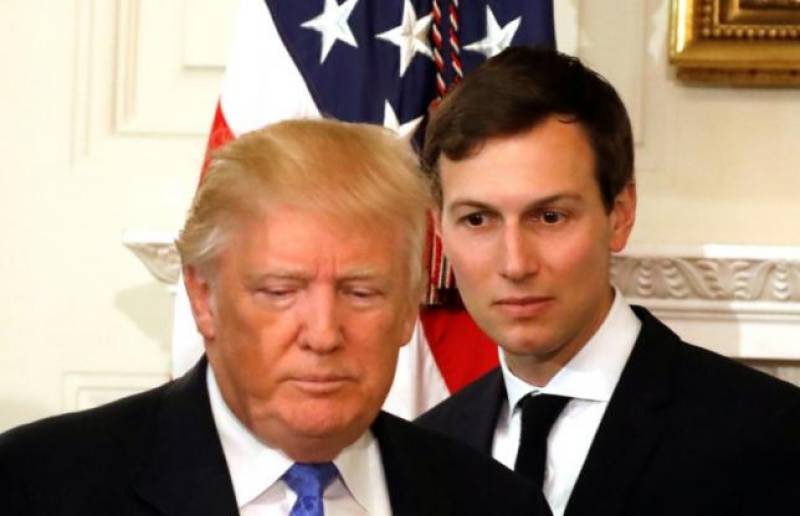 Washington (Reuters): US President Donald Trump attacked the news media and dismissed leaks from the White House as "fake news" on Sunday, following reports his son-in-law tried to set up a secret channel of communications with Moscow before Trump took office.

Shortly after Trump's remarks on Twitter, Homeland Security Secretary John Kelly made the rounds of Sunday television news shows to praise any so-called back channel communications, especially with Russia, as "a good thing."

The Republican president returned to the White House after a nine-day trip to the Middle East and Europe that ended on Saturday to face more questions about alleged communications between Jared Kushner and Russia's ambassador to Washington.

"It is my opinion that many of the leaks coming out of the White House are fabricated lies made up by the #FakeNews media," Trump wrote in a series of Twitter posts on Sunday.

In a statement later on Sunday night, carried by the New York Times, Trump praised Kushner and the work he has done in the White House.

“Jared is doing a great job for the country,” he said. “I have total confidence in him. He is respected by virtually everyone and is working on programs that will save our country billions of dollars. In addition to that, and perhaps more importantly, he is a very good person.”

The White House faces mounting questions about potential ties between Russia and Trump's presidential campaign, which are also the subject of criminal and congressional investigations.

Trump officials were preparing to establish a "war room" to address an issue that has begun to dominate his young presidency.

Aides said Trump was expected to meet with lawyers as early as Sunday, the New York Times reported.

Two Republican U.S. senators played down the Kushner reports on Sunday, while the former director of national intelligence, James Clapper, took a darker view of such contacts with representatives of Russian President Vladimir Putin.

"My dashboard warning light was clearly on and I think that was the case with all of us in the intelligence community - very concerned about the nature of these approaches to the Russians," Clapper told NBC's "Meet The Press."

Kushner, who is married to Trump's daughter Ivanka, had contacts with Moscow in December about opening a secret back channel of communications, according to news reports published while Trump was away on his trip.

The 36-year-old Kushner, a real estate developer with no previous government experience, had at least three previously undisclosed contacts with the Russian ambassador to the United States during and after the 2016 presidential campaign, seven current and former US officials told Reuters.

"Whenever you see the words 'sources say' in the fake news media, and they don't mention names," Trump wrote, "it is very possible that those sources don't exist but are made up by fake news writers. #FakeNews is the enemy!"

Contacts between Trump associates and Russian officials during the campaign coincided with what U.S. intelligence agencies concluded was a Kremlin effort through computer hacking, fake news and propaganda to boost Trump's chances of winning the White House.

"It's both normal, in my opinion, and acceptable," he said on ABC's "This Week" program. "Any way that you can communicate with people, particularly organizations that are maybe not particularly friendly to us, is a good thing."

Kelly told "Fox News Sunday" there was nothing wrong with the Trump transition team trying to build relationships with the Russians as they prepared to take over the White House.

U.S. Representative Adam Schiff, the top Democrat on the House Intelligence Committee, said such secret channels may be used in situations including peace talks with the Taliban in Afghanistan or for the release of American hostages.

"But for people associated with the campaign after that campaign has ended and where the Russians during that campaign were helping you, to try to establish a back channel and hide it from your own government, that's a serious allegation," he said.

Schiff was particularly concerned about a Washington Post report that the back channel would have been conducted at a Russian diplomatic facility to avoid monitoring in U.S. communications systems. "You have to ask, well, who are they hiding the conversation from?" he said on ABC.

Schiff said he expected Kushner, who serves as an unpaid adviser to Trump, to appear before his committee and suggested his security clearance be reviewed.

Republican US Senator Lindsey Graham told CNN he doubted the Kushner reports were accurate. Senator Bob Corker, chairman of the Foreign Relations Committee, noted that Kushner has been willing to answer questions. "They reached out to us yesterday to make sure that we knew that was the case and I’m sure he’s willing to do so,” Corker said on NBC's "Meet the Press."

Though he had not seen evidence of collusion when he stepped down on Jan. 20, Clapper said all the signs made an FBI investigation not only appropriate but necessary.

"Russia, at least for my money, is our primary adversary," he told NBC. "They are not our friends. They are in to do us in."