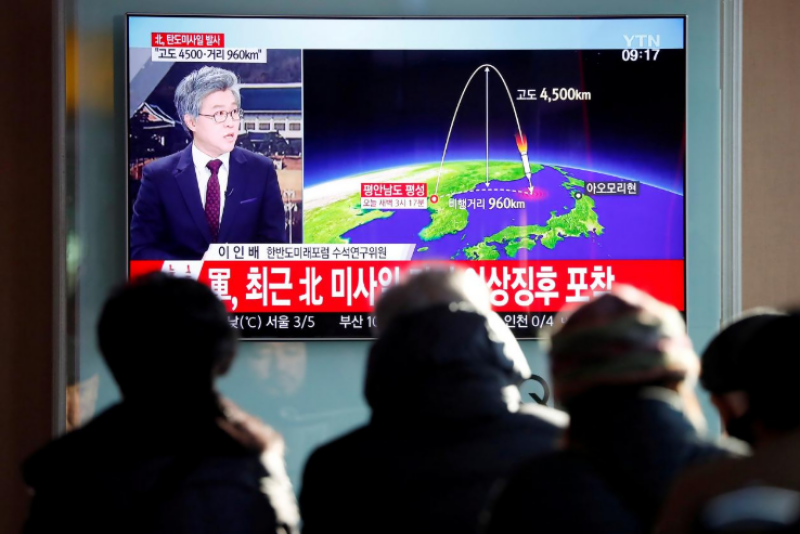 Seoul/washington (Reuters): North Korea launched what officials said was likely an intercontinental ballistic missile (ICBM) that flew high into space before landing near Japan on Wednesday, showing Pyongyang may now be able to reach Washington, D.C. with its weapons.

The missile test, North Korea’s first since mid-September, came a week after U.S. President Donald Trump put North Korea back on a U.S. list of countries it says support terrorism, allowing it to impose more sanctions.

North Korea has conducted dozens of ballistic missile tests under its leader, Kim Jong Un, in defiance of international sanctions. Trump has vowed not to let North Korea develop nuclear missiles that can hit the mainland United States.

The South Korean military said the missile reached an altitude of around 4,500 km (2,800 miles) - more than 10 times the height of the international space station - and flew 960 km (600 miles) before landing in Japan’s exclusive economic zone. U.S., Japanese and South Korean officials all agreed it was likely an ICBM but it did not pose a threat to the United States, its territories or allies, the Pentagon said.

“It went higher frankly than any previous shot they’ve taken, a research and development effort on their part to continue building ballistic missiles that can threaten everywhere in the world, basically,” U.S. Defense Secretary Jim Mattis told reporters at the White House.

“It is a situation that we will handle,” Trump told reporters at the White House.

President Moon told Trump during their call that North Korea’s missile technology seemed to have improved, a spokesman for the South Korean leader’s office said.

Trump, who was briefed on the missile while it was in flight, said it did not change his administration’s approach to North Korea, which has included new curbs to hurt trade between China and North Korea.

Washington has said repeatedly that all options, including military ones, are on the table in dealing with North Korea.

Other than carrying out existing U.N. sanctions, “the international community must take additional measures to enhance maritime security, including the right to interdict maritime traffic” traveling to North Korea, Tillerson said in a statement.

The U.N. Security Council was scheduled to meet on Wednesday to discuss the launch, which Secretary-General Antonio Guterres strongly condemned. “This is a clear violation of Security Council resolutions and shows complete disregard for the united view of the international community,” his spokesman said in a statement.

An official at South Korea’s Joint Chiefs of Staff said they presumed the missile was a Hwasong-14 - a two-stage ICBM North Korea tested twice in July.

Japanese officials said the missile flew for 53 minutes and broke up before landing in Japan’s exclusive economic zone.

“If these numbers are correct, then if flown on a standard trajectory rather than this lofted trajectory, this missile would have a range of more than 13,000 km (8,100 miles) ... Such a missile would have more than enough range to reach Washington, D.C., and in fact any part of the continental United States,” the U.S.-based Union of Concerned Scientists said.

However, it was unclear how heavy a payload the missile was carrying, and it was uncertain if it could carry a large nuclear warhead that far, the nonprofit science advocacy group added.

Either way, experts believe North Korea will soon have the ability to threaten the continental United States, if it doesn’t already.

“We don’t have to like it, but we’re going to have to learn to live with North Korea’s ability to target the United States with nuclear weapons,” said Jeffrey Lewis, head of the East Asia Nonproliferation Program at the Middlebury Institute of Strategic Studies.

South Korea’s Moon said the launch had been anticipated and the government had been preparing for it. There was no choice but for countries to keep applying pressure and sanctions against North Korea, he added.

“The situation could get out of control if North Korea perfects its ICBM technology,” Moon said, according to the Blue House after a national security council meeting.

“North Korea shouldn’t miscalculate the situation and threaten South Korea with a nuclear weapon, which could elicit a possible pre-emptive strike by the United States.”

U.S. stocks briefly pared gains on the news but the S&P 500 index was up almost 1 percent at the close and Asian markets largely shrugged off the news.

After firing missiles at a rate of about two or three a month since April, North Korea paused its missile launches in September, following a missile it fired that passed over Japan’s northern Hokkaido island on Sept. 15 and far out into the Pacific Ocean.

North Korea has said its weapons programs are a necessary defense against U.S. plans to invade. The United States, which has 28,500 troops in South Korea as a legacy of the 1950-53 Korean war, denies any such intention.

Last week, North Korea denounced Trump’s decision to relist it as a state sponsor of terrorism, calling it a “serious provocation and violent infringement.”

A U.S. government source said the U.S. assessment was the launch was the latest in a well-calculated and serious series of tests to develop and perfect North Korea missile systems rather than any response to Trump.

Trump has traded insults and threats with Kim and warned in September that the United States would have no choice but to “totally destroy” North Korea if forced to defend itself or its allies.