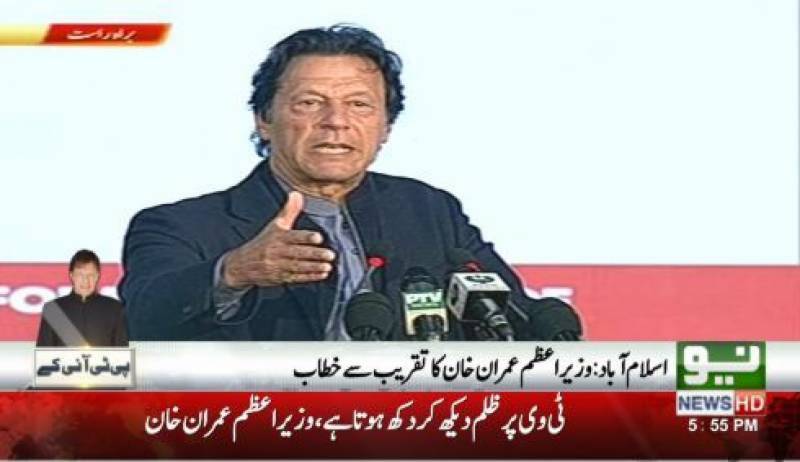 Islamabad (Staff Report/Agencies): Pakistan Tehreek-e-Insaf (PTI) on Thursday organised a ceremony at the Jinnah Convention Centre in the federal capital to apprise the nation of the government's performance over the first 100 days in power.

Senator Faisal Javed formally opened the event with a brief intro before making way for recitation of the Holy Quran.

While addressing the ceremony, Prime Minister Imran Khan, who was the chief guest on the occasion, said that the policies adopted by his government in the first century of days in power were inspired by the state of Madina.

"In Madina, Prophet Muhammad (Peace Be Upon Him) adopted policies that were based on compassion; all policies were made for the poor," he said. "The tax system of Zakat was established where money was collected from the rich and redistributed to the downtrodden."

He also thanked first lady Bushra Bibi for putting up with his tough schedule, adding that "I have taken just a single day off in the first 100 days".

A major contributing factor to the "downtrodden's" plight, the PM said, is corruption, and explained why he has been so vociferous about the menace.

"The difference between developed and underdeveloped countries is corruption," he said. "We have so much assets but we are still behind, and our institutions are in shambles — all because of corruption.

"I did not know the extent of theft and corruption until I came to power. Every day something new comes up."

He said the government, together with health reforms, was introducing health cards, regretting that a poor man's entire budget is spent on treatment of diseases.

"We have decided that poor families across Pakistan will get health cards," Khan said.

Khan said his government was trying to introduce uniform curriculum across the county. "We planned how to bring children back to schools; we are bringing a complete plan for education."

He said his government was trying to introduce an education system which could change the system.

"Small farmers are left behind because they do not have the technology, knowledge and money," he said. "We have to provide them the latest machinery and subsidies so they can purchase [latest] machinery."

The premier said that Pakistan's fisheries exports are "non-existent despite water resources", adding that "a private party has done a pilot project through which shrimp farming can be done".

He also floated the idea of "caged fishing, especially in Balochistan" which he said has "so much potential; we can export as well".

He urged the expansion of the tax net, explaining that low tax collection lead to inflation. "How is it that only 72,000 people show their income above Rs 200,000?" he wondered.

PM Khan said that Pakistan's tourism industry has great potential, adding that a task force has been formed to promote the country's religious and ecological tourism.

The prime minister gave an overview of the planned legal forms, for which he credited Law Minister Farogh Naseem.

As part of the reforms, he said, "civil courts will have to decide cases within a year and a half".

"Legal aid authority will provide legal help to people who cannot afford to hire one," he added.

PM’s Adviser for Establishment Division Shahzad Arbab said that the government had managed to initiate at least 18 of the projects and schemes out of the 36 projects it had announced in May.

Draft Local Government Act of Khyber Pakhtunkhwa, Punjab and ICT: Review of Pakhtunkhwa and Punjab LG system with recommended improvements. Proposed blueprint for revamped LG system for Punjab, KP and ICT developed for review. Draft legislation to amend LG law in each province / ICT, and intended timelines for election published is still being worked on.

Increase Pakistan’s regional and global relevance: Key foreign policy issues on which strategy needs to be reviewed by the PM prioritised. National positions, and plans of action on all key issues, and in particular on Kashmir, approved by the PM. Enhance Pakistan’s National Security