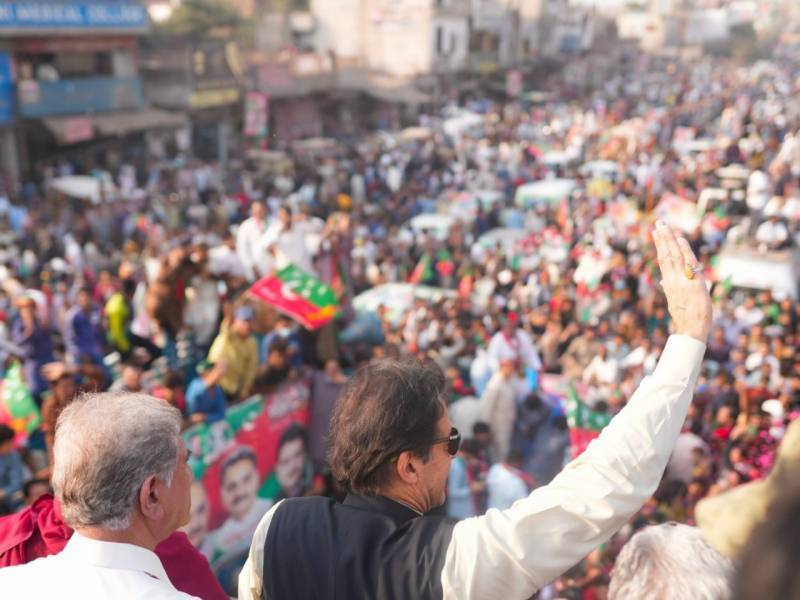 Addressing the PTI supporters, the PTI chief, in continuation of his “constructive criticism” of the establishment, said it was highly regrettable the way a 75-year-old senator was picked up and tortured.

He was citing the alleged torture inflicted upon PTI leaders Shahbaz Gill and Azam Swati.

“I want to tell all of them today that we are humans and not sheep,” he said.

Without naming any specific individual, Imran said “don’t treat us like animals” while calling out the elevation of the alleged corrupt rulers to power.

“You first tell us the Nawaz Sharif was a robber and now he is clean. Previously Zardari was ‘Mister 10 per cent’ in the world and but now since ‘we have decided, you also accept him’.”

He exclaimed again “we are not bhair bakrian” and that “you are standing with them today”.

He also questioned if they could not see the “thieves” who were pardoned for stealing Rs 11,000 billion. “Do you not see the oppression, the violation of fundamental rights?” he asked.

Khan said that human dignity is protected in the Constitution. He requested the chief justice of Pakistan to take action on Swati’s appeal and “show that we are a human society”. The PTI chief reiterated that justice was a right.

Meanwhile, Information Minister Marriyum Aurangzeb on Saturday categorically ruled out any negotiations with Imran Khan, saying that the PTI chief "does not want transparent elections but chaos and bloodshed in the country”.

In a statement, she said that the “real face of Imran Khan, his politics of lies and fake character have been exposed.”

The minister said the reality of “foreign-funded fitna” can no longer be hidden by “spreading the mental filth on the streets”.