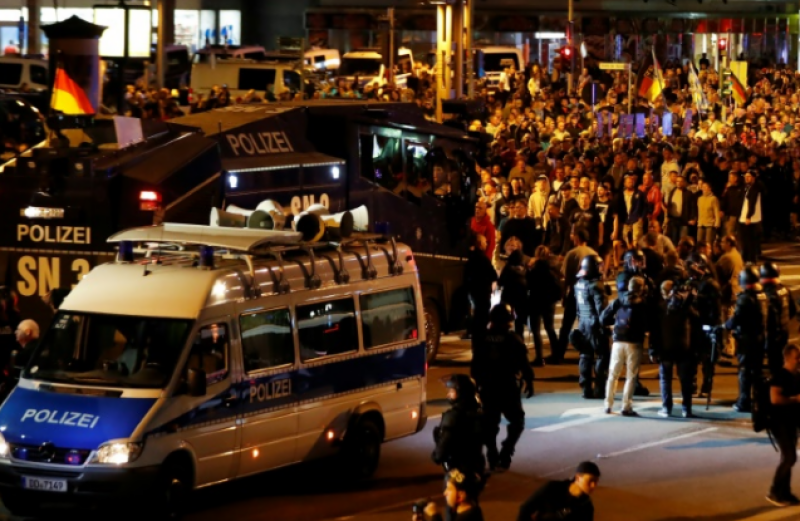 Berlin (Agencies): A migrant was subjected to xenophobic insults and beaten up in the northern German city of Wismar Wednesday evening, police said, in an attack that comes as the country is shaken by far-right demonstrations against foreigners.

The 20-year-old man, whose nationality was not specified, was walking home when “he was stopped by three German-speaking people who insulted him in a xenophobic manner,” police said.

Two of them then hit him in the face before the third “hit him on the shoulder and ribs with an iron chain.”

The victim fell to the ground and was beaten before his attackers fled. He suffered a broken nose and bruises to his face and upper body, said police who have opened an investigation.

The attack in the Baltic coastal city comes as Germany is reeling from weekend protests by right-wing extremists in the eastern state of Saxony, long a hotspot for xenophobia.

After the fatal stabbing of a German man, 35, allegedly by a Syrian and an Iraqi, thousands of far-right protesters marched in the city of Chemnitz for two straight days, some chasing down people they believed were immigrants.

Police reported assaults by extremists against at least three foreigners on Sunday, while investigations were opened in 10 cases of the protesters performing the illegal Hitler salute.

The ugly scenes of mostly white men, many of them extremist soccer hooligans, hurling abuse at people they deemed to be foreigners, have deeply alarmed Germany.

Saxony has been a stronghold of far-right parties and groups that bitterly oppose Chancellor Angela Merkel for her 2015 decision to keep open German borders to a mass influx of migrants and refugees.