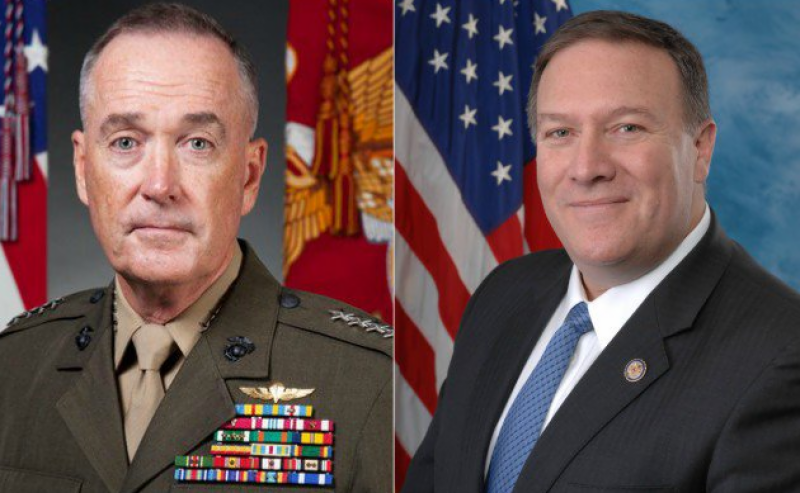 Washington (Agencies): US Defence Secretary James Mattis has said that the US military chief Joseph Dunford will also accompany Secretary of State Mike Pompeo during visit to Pakistan and the need to fight terrorists would be “the primary part” of their discussions.

While speaking at a news briefing at the Pentagon on Wednesday, Mattis said the secretary of state and the chairman are going to Islamabad to meet with the new government that’s in place.

The US defence secretary added that in their talks with Pakistani officials, the delegation will “make very clear what we have to do, all of our nations, in meeting our common foe, the terrorists, revealed Mattis.

Mattis did not comment when a journalist asked if he trusted the new Pakistani leadership’s commitment to fight terrorism.

Chairman of the Joint Chiefs of Staff Committee General Joseph F. Dunford, who also attended the briefing, detailed that the US had ‘permanent interests in South Asia’ and wanted to “maintain a presence (there) to have influence in that region”.

Secretary of State Michael Pompeo and Gen Dunford are expected in Islamabad in the first week of September for talks with their counterparts.

Gen Dunford’s inclusion in the delegation dispels the impression that the Islamabad tour was not a proper visit but just a stopover, as US state and defence secretaries were both going to be in New Delhi next week.

The high level US delegation is expected to arrive in Pakistan on September 5. They are also scheduled to meet Prime Minister Imran Khan.

On Tuesday, speaking to the Senate session, Foreign Minister Shah Mahmood Qureshi again clarified that the handout of the US State Department regarding telephonic conservation was contrary to the facts.

The US Secretary of State is expected to visit Pakistan on the 5th of next month.

“Weightage will be given to the opinion of people and its elected representatives while taking forward relations with Washington”, the FM Qureshi said.