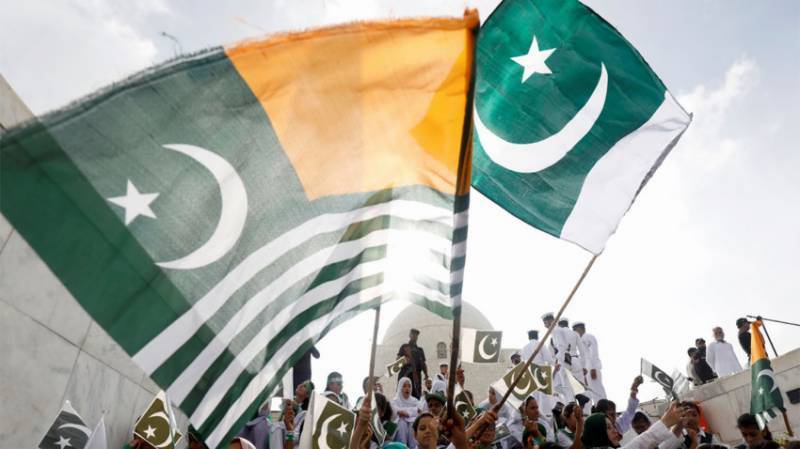 Islamabad (Web Desk): The nation is observing ‘Kashmir Hour’ today to express solidarity with the Kashmiris who have been facing human rights violations in Indian-occupied Kashmir (IOK) amid lockdown which has entered the 25th day.

According to details, the ‘Kashmir Solidarity Hour’ was observed between12pm to 12:30pm throughout the country and national anthems of Pakistan and Azad Jammu and Kashmir (AJK) were played to express solidarity with the Kashmiris.

Prime Minister Imran Khan, who requested all Pakistanis to come out on Friday to send a message of solidarity, is leading the rally outside the PM Secretariat.

All the chief ministers and parliamentarians are also gathered outside the CM Secretariat buildings.

Addressing the rally, PM Imran said, "Our Kashmiris are going through a difficult phase. Approximately 8 million Kashmiris for the last four weeks have been locked under curfew.”

During national anthems, all the people and vehicles came to a standstill.

Meanwhile, people remained out of their offices, houses, markets and malls, and gathered in the nearby streets all over the country.

After Jumma prayers, special prayers for the people of Kashmir would be offered.

Rallies and protest demonstrations will be held across the country today to express solidarity with Kashmiri people who are struggling for their right to self-determination.

The speakers will highlight atrocities being perpetrated on innocent Kashmiris by Indian forces.

The government has also postponed the joint session of parliament called to mark the start of the new parliamentary year.

On Thursday, in a series of tweets, Prime Minister Imran Khan urged the nation to come out on Friday (today) from 12pm until 12:30pm to show solidarity with Kashmiri people.

We must send a strong message to Kashmiris that our nation stands resolutely behind them. So I am asking all Pakistanis for half an hour tomorrow stop whatever you are doing & come out on the road to show solidarity with the Kashmiri people.