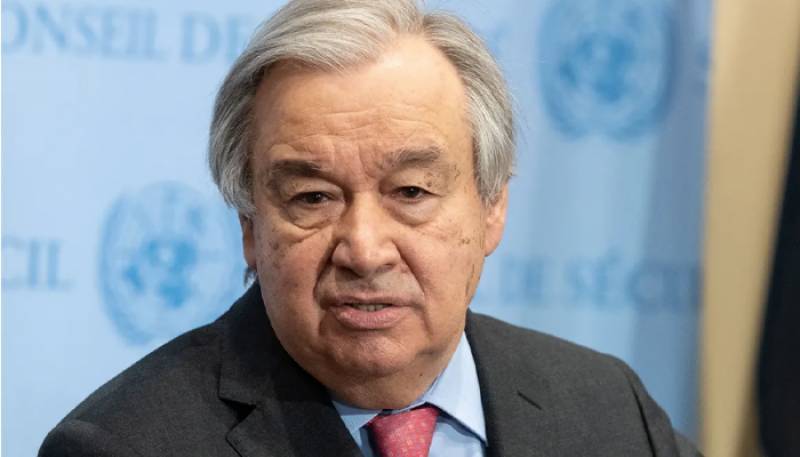 Islamabad (Web Desk/Agencies): The United Nations (UN) and the Pakistani government on Tuesday issued a flash appeal for $160 million for the "immediate relief" of millions of people whose lives have been disrupted by devastating rains and floods in large parts of the country.

The appeal was issued during the launch of Flood Response Plan (FRP) 2022.

"Pakistan is awash in suffering," UN Secretary-General Antonio Guterres said in a video message for the launch of the appeal in Islamabad and Geneva.

"The Pakistani people are facing a monsoon on steroids - the relentless impact of epochal levels of rain and flooding," he said.

The UN chief said that the scale of needs, with millions of people forced from their homes, schools and health facilities destroyed and livelihoods shattered by the climate catastrophe, required the world's collective and prioritised attention.

Guterres said the $160 million he hoped to raise with the appeal would provide 5.2 million people with food, water, sanitation, emergency education and health support.

The UN chief appealed for a speedy response to Pakistan's request to the international community for help.

"Let us all step up in solidarity and support the people of Pakistan in their hour of need," he said.

"Let's stop sleepwalking towards the destruction of our planet by climate change," the UN chief asserted.

Addressing at the launching ceremony, Foreign Minister Bilawal Bhutto Zardari said Pakistan needed the international community’s prompt and immediate support in stepping up and expanding its efforts to rebuild and reconstruct the devastated areas and other infrastructure.

He stressed that the international community must share the responsibility of supporting those countries that had been facing the threats of global warming and climate change.

These international efforts would complement the government of Pakistan’s efforts he said and urged the global community to fully back the flash appeal by contributing generously.

The foreign minister while explaining the magnitude of the disaster caused by floods said the damages during the recent calamity exceeded the damages caused during the 2010 floods.

He said Pakistan had been a ground zero for the century’s existential climate change and global warming threats as about 72 districts and 33 million population had been badly affected while more than 1000 lives were lost, hundreds of others were injured, besides millions of houses damaged, livestock and crops were wiped out.

Pakistan had been facing the direct consequences of global warming and in the frontline of such devastation wrought by the climatic changes, he added.

He said the disaster was colossal and the flood-hit areas were lacking critical basics.

FM Bilawal said the rainfall in Pakistan since mid-June had been equivalent to three times the 30-year national average and the southern, central and northern regions of the country were worst affected.

He said that millions were displaced who had been now spending days and nights, in camps, in the open skies, adding they were in dire need of clean drinking water, food and shelters.

"The roads infrastructure has been damaged impeding their efforts to relocate and provide support to the flood-trapped people, he said, adding it was a national emergency and life-defining moment".

He also highlighted the government’s relief measures including cash payments to each affected family and the compensation amount for the loss of lives and damaged homes.

He said the government was cognizant of its responsibility and had allocated $173 million to help flood-hit people through direct cash transfers which would be disbursed through the Benazir Income Support Programme (BISP) to 1.5 million families who will each receive Rs25,000 ($115) in immediate cash relief.

The foreign minister said that Rs5 billion ($23 million) had also been allocated to the National Disaster Management Authority (NDMA) for relief activities.

“The government is also providing Rs1 million compensation to the next of kin of each deceased; Rs250,000 for injuries and partially damaged houses; and Rs500,000 for destroyed houses,” he added.

FM Bilawal also thanked the countries, UN, development partners and others for extending support to Pakistan and expressed the optimism that other countries would fully back such relief efforts.

Julien Harneis, UN Resident Coordinator and Humanitarian Coordinator in Pakistan, also highlighted the scale of destruction caused by natural calamity and the country’s requirements to cope with the situation.

Minister for Planning, Chairman Relief Coordination Committee Ahsan Iqbal briefed the session about the relief and rehabilitation efforts and the continuing situation.

The launching was attended by all UN member states as well as various UN agencies and humanitarian organizations working in the area of disaster relief.

The FRP would complement the government’s overall humanitarian response to the recent floods caused by unprecedented rains in Pakistan.