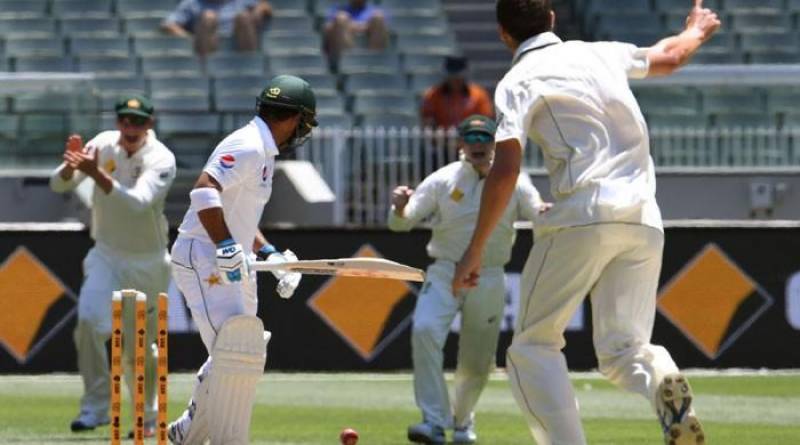 Melbourne (Online): Australia bowled out Pakistan for 163, winning the second Test in Melbourne on Friday by an innings and 18 runs.

Pacer Mitchell Starc delivered the final blow by ending Sarfraz Ahmed's resistance at 43 and getting Wahab Riaz and Yasir Shah out for ducks.

Earlier Nathan Lyon grabbed the wickets of veterans Younis Khan (24) and skipper Misbah-ul-Haq (0) and then dismissed Asad Shafiq for 16 to put the tourists under pressure.

First innings double-centurion Azhar Ali was on 34 with Sarfraz Ahmed not out at one, at tea.

With a declaration shortly before lunch, Skipper Steve Smith revived hopes of achieving a result in the rain-disrupted Test.

He called a halt to a massive first innings at 624-8-- remaining unbeaten on 165 off 246 balls -- giving his fast bowlers the use of the new ball just before the interval.

The tactic paid immediate dividends with Josh Hazlewood bowling Sami Aslam off a bottom edge for two in the second over of the innings.

The decision to declare the Australian first innings was accelerated by a big-hitting knock of 84 off 91 balls from fast bowler Mitchell Starc.

Starc clubbed seven sixes, the most in an innings in a Melbourne Test, and was particularly severe on Yasir Shah, belting the leg-spinner for five sixes.

He reached his eighth Test half-century and second fifty this season off 69 balls before he was given a reprieve on 51.

Starc skied spinner Azhar Ali to long-off where Sohail Khan made a hash of the catch, fumbling the two-handed chance.

He took to Azhar hoicking him for successive sixes to race to 70.

Starc hit another towering six off Yasir before he was finally out caught by Asad Shafiq at backward square leg.

His seven sixes surpassed the record in an innings in a Melbourne Test held by Andrew Symonds with six in his 72 against South Africa in 2005.

Starc put on 154 runs for the seventh wicket with Smith off 172 balls and upon Nathan Lyon´s dismissal, caught and bowled by Yasir for 12, Smith declared the innings and raced from the ground.

Australia lead the three-Test series 1-0 after beating Pakistan by 39 runs in the Gabba Test.