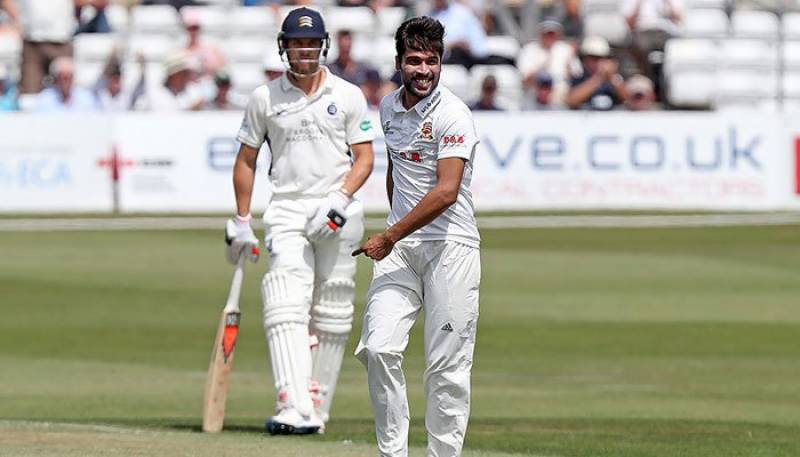 According to details, Amir continued his rich seam of form from the Champions Trophy win over India, striking early for Essex and bagging two wickets for an economy of 3.31 in the first innings.

Harmer then took nine for 95 as Essex beat Middlesex by an innings and 34 runs to extend their lead at the top of the First Division table to 29 points on the final day of the inaugural round of day-night fixtures. Middlesex appeared to be heading for a draw at Chelmsford with former England batsman Nick Compton making 120 and putting on 153 with Ireland´s Paul Stirling.

But Harmer removed Stirling to spark a collapse that saw Middlesex lose their last seven wickets for just 58 runs to be dismissed for 262 under the lights.

Harmer removed Steven Finn in the penultimate over to complete Essex´s victory and take his wicket tally to 28 for 300 runs in the last two matches. In the Second Division, Afghan teenager and fellow spinner Hamidullah Qadri had a debut to remember as his second-innings five-wicket haul led Derbyshire to their first County Championship victory for two years.

The 16-year-old Qadri, born in Kandahar, is the youngest player to feature for Derbyshire in the Championship. He took five for 60 from 26.3 overs to skittle out hosts Glamorgan for 172 as the Midlands side secured a 39-run win in Cardiff.

What a week for 16-year-old Hamidullah Qadri

The first county cricketer to have been born in the 21st Century, Qadri´s haul saw Derbyshire complete their first Championship victory for 710 days.