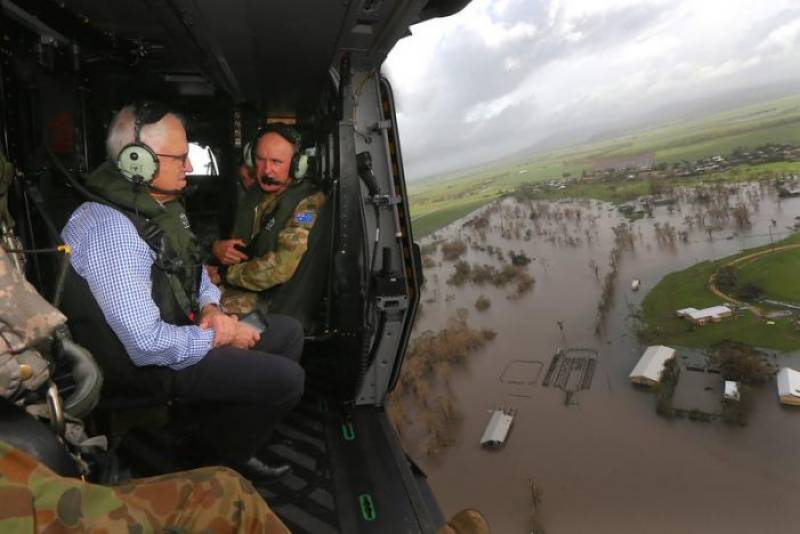 Sydney, Australia (Reuters): Authorities ordered the evacuation of large parts of a major town of more than 25,000 people including tourists in eastern Australia on Thursday as a storm system generated by a powerful cyclone that pummeled the northeast two days ago swept down the coast with heavy rain.

Queensland Premier Annastacia Palaszczuk told reporters in the state capital, Brisbane, "This severe weather system that began with Cyclone Debbie and is tracking down the coast is causing havoc across our state."

The cyclone was downgraded to a tropical low on Wednesday but it was driving squalls with torrential rain across a 1,200-km (745-mile) stretch of Australia's east coast, swelling rivers and prompting widespread flood warnings.

In Lismore in the north of neighboring New South Wales State, the State Emergency Service told residents to leave because weather forecasts predicted the town's worst flood in nearly 20 years.

The rural hub in the Northern Rivers region of New South Wales is home to at least 25,000 people.

In the cyclone-hit tropical north, the poor weather has slowed what was expected to be a lengthy clean-up operation.

Military helicopters, ferries and planes brought hundreds of holidaymakers stranded on resort islands in the storm's path to the mainland, where tens of thousands more people were still without power.

Resorts along the world-famous Great Barrier Reef and the Whitsunday coast bore the brunt of the storm on Tuesday with wind gusts stronger than 260 kph (160 mph).

About 2,500 insurance claims have been filed but Queensland's top two insurers, Suncorp Group Ltd and RACQ, said it was too early to put a dollar figure on the damage.

One female tourist was killed in a car crash on Monday that police said was due to wild weather as Cyclone Debbie approached. Another two people were injured as the storm passed through.