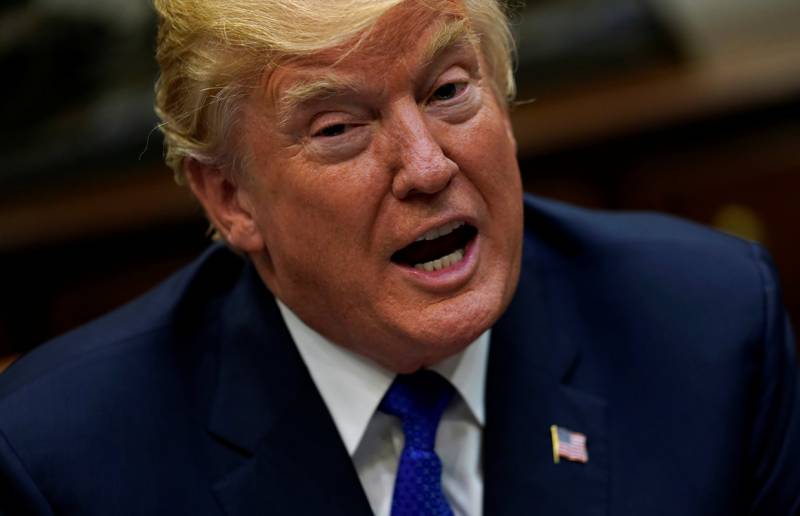 The White House defended the retweets by the Republican president, who during the 2016 U.S. election campaign called for “a total and complete shutdown of Muslims entering the United States,” saying that he was raising security issues.

As president, Trump has issued executive orders banning entry to some citizens of several Muslim-majority countries, although courts have partially blocked the measures from taking effect.

“Look, I‘m not talking about the nature of the video,” White House spokeswoman Sarah Sanders told reporters. “The threat is real and that’s what the president is talking about is the need for national security, the need for military spending, and those are very real things. There’s nothing fake about that.”

Jayda Fransen, deputy leader of anti-immigration Britain First, posted the videos which she said showed a group of people who were Muslims beating a teenage boy to death, battering a boy on crutches and destroying a Christian statue. Fransen was convicted earlier this month of abusing a Muslim woman and was ordered to pay a fine and legal costs.

Some British lawmakers demanded an apology from Trump for sharing the videos with his nearly 44 million Twitter followers and U.S. Muslim groups said he had been incendiary and reckless.

“It is wrong for the president to have done this,” the spokesman for British Prime Minister Theresa May said.

“Britain First seeks to divide communities through their use of hateful narratives which peddle lies and stoke tensions. They cause anxiety to law-abiding people,” the spokesman said.

Trump fired back at May over her criticism.

“Theresa @theresamay, don’t focus on me, focus on the destructive Radical Islamic Terrorism that is taking place within the United Kingdom. We are doing just fine,” Trump tweeted, using an incorrect Twitter handle for May. He later issued a tweet with her correct handle, “@Theresa_May”.

Reuters was unable to immediately verify the videos and Fransen herself said they had come from various online sources which had been posted on her social media pages.

“I‘m delighted,” Fransen, who has 53,000 Twitter followers, told Reuters. She said Trump’s retweets showed the president shared her aim of raising awareness of “issues such as Islam”.

The White House repeatedly refused to be drawn into the content of the videos or whether Trump was aware of the source of the tweets.

“It’s about ensuring that individuals who come into the United States don’t pose a public safety or terrorism threat,” White House spokesman Raj Shah told reporters aboard Air Force One.

Fransen thanked Trump and said, “The important message here is Donald Trump has been made aware of the persecution and prosecution of a political leader in Britain for giving what has been said by police to be an anti-Islamic speech.”

One of the videos that Trump retweeted first circulated on social and Egyptian state media in 2013, showing what appeared to be supporters of now-ousted Islamist President Mohammed Mursi throwing two youths from a concrete tower onto a roof.

In reference to another video that was titled “Muslim migrant beats up Dutch boy on crutches!”, the Netherlands embassy in the United States tweeted back at Trump saying:

“@realDonaldTrump Facts do matter. The perpetrator of the violent act in this video was born and raised in the Netherlands. He received and completed his sentence under Dutch law.”

Trump’s promotion of the videos contrasts with the way he often criticizes mainstream U.S. media, lambasting some outlets for “fake news” when they air segments he regards as being against him.

“What we saw today is one of many videos that is circulating on anti-Muslim hate websites,” said Ilhan Cagri with the U.S.-based Muslim Public Affairs Council.

“It is years-old and simply aims to breed fear for Muslims and Islam and breed violence. It has nothing to do with the practice of Islam itself,” Cagri said.

The Anti-Defamation League said the retweets would only encourage “extremists and anti-Muslim bigots in the United States and abroad who exploit the propaganda value.”

“Such content is the engine that fuels extremist movements and will embolden bigots in the U.S. who already believe the president is a fellow traveler,” the ADL said in a statement.

Democrats in Congress and at least one Republican lawmaker were also critical of Trump.

“The violence depicted in these videos is horrific, but it is abhorrent that President Trump would choose to deliberately fan the flames of hatred and religious bigotry,” Democratic U.S. Senator Jack Reed said in a statement.

Republican Senator John McCain, a frequent critic of Trump, said he was “surprised” that Trump had chosen to retweet those videos. “What do I think about it? Obviously, surprised. Surprised,” he told Reuters as he left a meeting with Jordanian King Abdullah at the U.S. Senate.

Britain First is a peripheral political party which wants to end all immigration and bring in a comprehensive ban on Islam, with anyone found to be promoting the religion’s ideology to be deported or imprisoned.

The group, which rarely garners any media attention but attracts a few hundred protesters to its regular street demonstrations, states on its website it is a “loyalist movement.” Critics say it is simply racist.

Last week, Fransen was charged by the police in Northern Ireland with using threatening, abusive or insulting words in a speech at a rally in Belfast in August.

Along with the group’s leader, she was also charged in September with causing religiously aggravated harassment over the distribution of leaflets and posting online videos during a court trial involving a number of Muslim men accused and later convicted of rape.

Politicians in Britain condemned Trump, with Jeremy Corbyn, leader of the opposition Labour Party, describing his tweets as “abhorrent, dangerous and a threat to our society.”

In contrast, David Duke, a former Ku Klux Klan leader who has run for political office in Louisiana, praised Trump. “He’s condemned for showing us what the fake news media won‘t,” Duke wrote on Twitter. “Thank God for Trump! That’s why we love him!”